Women from the ANC found a new way to try remove the DA's acting city manager in Tshwane from her seat - physically. 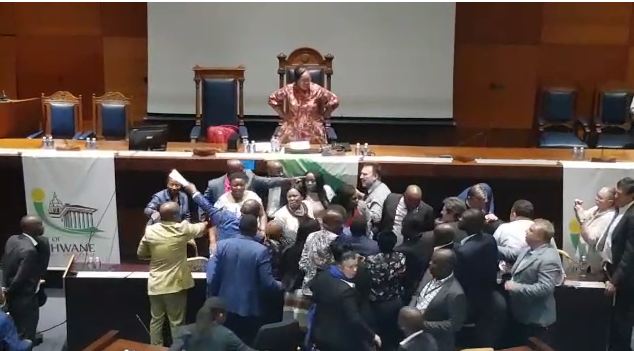 A scuffle broke out in the Tshwane council sitting on Wednesday when female members of the ANC were forcefully trying to remove the city’s governance and support officer from her seat, as she was the acting city manager for the day.

The city had sat for an urgent council sitting at the Tshwane chambers after Mayor Solly Msimanga proposed the suspension of City Manager Moeketsi Mosola for his alleged involvement in irregularly awarding a contract to engineering consultant company, GladAfrica.

However, while ANC and EFF councillors proposed the debate for Mosola’s suspension be open to the public and media gallery, the DA and Msimanga rejected the proposal, calling for an in-committee sitting.

Speaker Katlego Mathebe requested an adjournment to seek advice from the city’s Group Legal Service, but the EFF and ANC strongly disputed the request, insisting the matter was of public interest.

During the disagreement, it emerged that the current governance and support officer Lorette Tredoux was sitting before council as the acting city manager for the day.

This was strongly disputed by ANC councillors, with several female councillors attempting to remove Tredoux off her seat.

But Msimanga was puzzled by the ANC’s disruption, accusing them of delay tactics despite the party “crying the loudest” to have Mosola removed.

He said Mosola wrote a letter declaring that Tredoux would act on his behalf while council debates his suspension.

“The same people were shouting the loudest in the week, wanting Mosola gone. But they come here, singing and chanting, saying they are not after Mosola but are after [me]… It begs the question, what is really happening here? If this is a political ploy to save Mosola, and if he is guilty, investigations will tell what happens,” Msimanga told the media.