Various units have burnt to the ground after two caught on fire at a complex in Sunninghill. 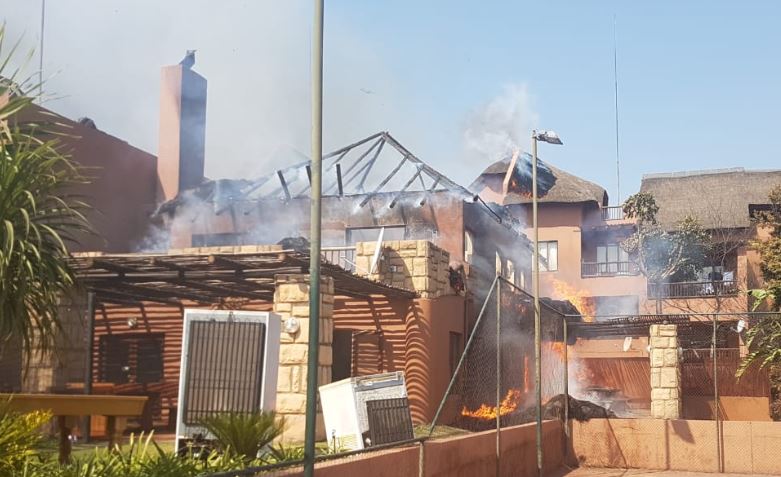 A fire burned units at a Sunninghill complex. Photo: Netcare911

A fire broke out at a complex on Eldoret Street in Sunninghill on Thursday morning, Fourways Review reports.

Johannesburg Emergency Management Services spokesperson Nana Radebe said the services were alerted to a structural fire at 9.35am.

ALSO READ: UPDATE: Confusion over cause of fire in Joburg building

Earlier, Radebe said, two flats had caught fire and no fatalities or injuries were reported.

Later on, Netcare911 tweeted that numerous flats had been burned.

Radebe said, “Preliminary investigations will be conducted after the firefighting.”

It is not known how the fire started but the emergency services are still on the scene, attending to the fire.

Candice James, Ward 93 councillor, said it seemed that a thatch roof had caught on fire.

“There are three fire engines from Sandton, Alexandra and Ivory Park fire stations on the scene to put out the fire,” said James.

She also said that ER24, Netcare 911 and Savika Security were also on the scene and assisting residents.

Chairperson of the Sunninghill community, Linda Gildenhuys,  said the complex had been evacuated. She alleged that the fire department had taken almost an hour to arrive on the scene, adding they were having a huge problem with onlookers and people who were trying to take photos.

Just last week, Sunninghill residents united to put out a blaze in a veld.

This is a developing story and more updates will be provided as they are made available.