The dilapidated Civitas building is overcrowded with no aircon or windows, while burst pipes leave a foul stench and sewage soaking into the carpets. Water leaking from the floor inside the National Department of Health building in the Pretoria CBD, 6 September 2018, Pretoria. Picture: Jacques Nelles

The state of the department of health’s headquarters in Pretoria hopefully does not reflect the state of the country’s public healthcare system, since that would place it firmly in the intensive care unit.

While many Pretorians might admire the department’s tall, glassy building in the CBD, what many don’t know is that the inside of the building is a huge health risk and a tragedy waiting to happen.

The Public Servants’ Association of SA (PSA) started protesting the fact that their workers were forced to risk their health by going to work in the Civitas building, which also houses the offices of Health Minister Aaron Motsoaledi, earlier this week.

The PSA filed an urgent application at the High Court in Pretoria yesterday to force the department to address its concerns.

On visiting the building yesterday, The Citizen was greeted by a placard at the entrance stating “we are sick and tired”.

Employees were slowly trickling out of the building, while others were sitting in the shade of trees outside, vowing not to return until their pleas were taken seriously. 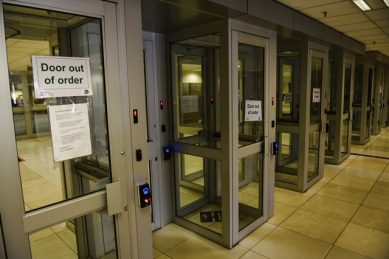 Non-operational security doors and biometric systems that according to staff have not been operating since they were first installed is seen inside the National Department of Health building in the Pretoria CBD, 6 September 2018, Pretoria. Picture: Jacques Nelles

It has only been eight years since the building was renovated. Built to house 800 people, the 29-storey south tower had to accommodate nearly 2 000 staff members.

“It has 29 floors but none of the aircons work. We have no windows, so we all breathe the same air. It makes us dizzy and nonproductive,” one of the workers, who asked to remain anonymous for fear of reprisal from their employer, told The Citizen.

Our reporter accessed the building much easier than one would expect, since at least nine of the 12 entrance doors that operate on a biometric system had “out of order” stickers pasted on the glass panels.

“These haven’t been working since they were installed. You can just walk through. The department pays money each month for the biometric systems to be maintained, but they are out of order,” said PSA’s Peter Moloi.

The foyers and long white-tiled corridors were empty. 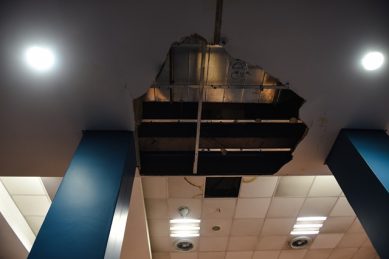 Leak damage that is not being repaired inside the National Department of Health building in the Pretoria CBD, 6 September 2018, Pretoria. Picture: Jacques Nelles

In each room we entered, at least a portion of the ceiling had collapsed. According to the protesting workers, this was due to constant burst water pipes, which often left the carpeted floors flooded.

The largest digital boardroom, which can occupy 150 people, was the worst-affected, with the department spending at least R500,000 a year to repair and maintain the burst water pipes, Moloi explained.

“The water here isn’t even clean. Most of the workers have to bring their own water while some have to boil the tap water from this building before drinking it,” said another worker.

Another employee said a pipe had burst on the 22nd floor, leaving a foul stench and sewage soaking the carpets.

On reaching the building’s upper levels, the smell of the mouldy carpets kicked in and it was easy to imagine the humidity and stuffiness once all 2 000 employees had clocked in for work. 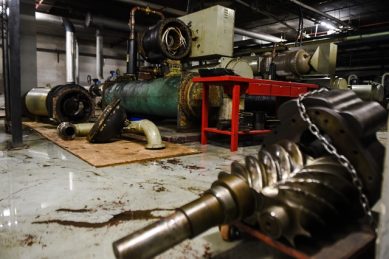 Unmaintained machinery is seen inside the National Department of Health building in the Pretoria CBD where employees have been protesting for months for the lack of maintenance and care in the building, 6 September 2018, Pretoria. Picture: Jacques Nelles

Each corner of the building was covered in surveillance cameras, but none of these apparently worked, with many of them being held in place by a single screw.

“These are just on display. They were paid for but have never worked. They are just here to decorate,” said another disgruntled employee.

Even the microwave, centred in the cafeteria on a boardroom table on the sixth floor, had a notice on the door stating it was “out of order”.

Following the blaze at the health department’s building in Johannesburg this week, the Pretoria staff were concerned that their building’s intercom, which is used in emergencies, was also out of order, and that they would be caught totally unawares should a similar tragedy occur. 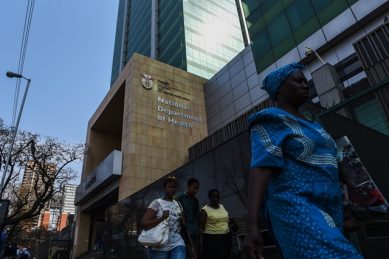 The National Department of Health building in the Pretoria CBD where employees have been protesting for months for the lack of maintenance and care in the building, 6 September 2018, Pretoria. Picture: Jacques Nelles

“The fire extinguishers are not serviced or maintained. Instead, they just put a new sticker on them to pretend they are serviced.

“Even the fire sprinklers on the ceilings are not working.

“We once had a fire drill, but some of us didn’t know about it because the intercom is not working.”

Moloi said they would deliver a petition to the Union Buildings today, requesting urgent intervention in the state of the country’s health department buildings.