This week’s six most brutal beefs

In a week fraught with conflict, here are all the greatest beefs starring Malema, Eminem, Afriforum, Mcebo Dlamini and more. When the South African rapper synonymous with the words “Fill it Up” tried to take legal action against Benny Mayengani when he used the phrase to promote his upcoming show at Giyani Stadium, he probably didn’t expect the leader of the berets to enter the ring in defence of the Tsonga musician.

We will defend you chief @BennyMayengani, don't be scared of bullies who are threatened by talent. We have the best in town, let them bring it on. #FillUpGiyaniStadium

Malema called Nyovest a bully who is “threatened by talent” after Nyovest’s lawyers sent a cease and desist letter to Mayengani for his use of the hashtag #FillUpGiyaniStadium, claiming that he has copyrighted the words when used in a hashtag.

The EFF even went so far as to issue a statement, slamming Nyovest for being “greedy” and for what they called a “selfish, desperate and lousy attempt to profit alone on what is anyway everyone’s, everyday language”.

So far, in response, Nyovest has not addressed Malema directly, but has RTed several tweets in which others voiced their disagreement with the EFF leader’s position, including this one:

You take a stance for your homeboy when you know well & clear what he’s doing is 100% wrong is not only opportunistic but embarrassing. I have so much respect for you, this is actually disgusting, we are NOT politicians! You are sacrificing the hard work of another Black Kid!! https://t.co/GHf0cm27sA

Eminem dropped Kamikaze on August 31, a surprise album which sees him return to his battle rap roots, taking on pretty much anyone who had anything negative to say about his previous project Revival.

On one song off Revival, Untouchable, about race relations in the US, Eminem raps from the perspective of a racist white cop and a black citizen, with one line saying he would ‘rather hear’ em say ‘Die N-word’ than Die Antwoord Ninja.’

It was a bit of a confusing line to decipher, and rather than attempting to do so Yolandi Visser made a response video in which she only takes Eminem to task for his inability to pronounce their name.

Eminem then confronted this on Kamikaze track Greatest, saying they must “deal” with the fact he can’t pronounce their name, adding “You dissed me and I was just trying to give you a shot. Now get the f**k out…”

Die Antwoord were quick to respond, in a video on Twitter in which Ninja raps and Yolandi is seen laughing in the background. Ninja takes the legendary rapper to task for allegedly using botox, and implies that he should call it quits, saying “You retired as a god and came back as a man.”

The video has been mainly negatively received, with many saying that it is not lyrically strong enough to compete with the “rap god.” An earlier diss track released by another act taken to task on Kamikaze, Machine Gun Kelly’s Rap Devil, received a far more positive response.

Eminem has not yet responded to either artist.

In a week with plenty of beefs competing for attention, one of the most interesting and confrontational came not from rappers or politicians but writers.

Pauw questioned whether the alleged paedophiles would have been able to fly in and out of the island in a helicopter unnoticed among other criticisms, reserving his harshest judgement for the late Minnie, who he called a “sloppy, negligent, and careless policeman”.

“I have serious problems with the integrity of especially Minnie,” said Pauw. Minnie is believed to have taken his own life shortly after the book was released.

Chris Steyn responded in similarly scathing fashion, saying it was Pauw’s journalism, not Minnie’s police work that was “sloppy” and saying he didn’t read the book carefully enough as he apparently got several names and details wrong in his review.

“Believe me, for the sake of those boys, I have always wished it were not true,” she said. 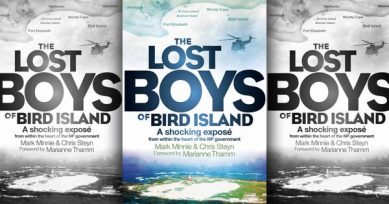 The Economic Freedom Fighters and Cosatu butted heads at the hearings in parliament this week held to probe views on the amendment of section 25 of the constitution to allow for land expropriation without compensation.

The EFF objected to the trade union federation’s choice of a white person, Matthew Parks, as their parliamentary coordinator.

While the party is known for such attacks, Cosatu issued a brutal rebuttal.

A statement from spokesperson Sizwe Pamla slamming what they termed “immature and racist attacks” by the party towards them, and calling the EFF “moral cretins and political idiots”. 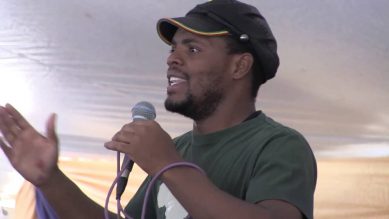 The outspoken Pastor Paseka “Mboro” Motsoeneng planned to lay charges of crimen injuria against the Fees Must Fall activist Mcebo Dlamini among other members of a WhatsApp group called Open Politics.

Dlamini soon clapped back, calling Mboro “bored” and saying he should be ignored.

“As a country, we have serious things, we cannot be entertaining people who are suffering from things we don’t know,” said Dlamini.

Perhaps the activist should be a bit more worried about the proposed legal action, as it wouldn’t be the first time he has been challenged legally for his words. 6. Afriforum vs the world

The Afrikaans lobby group Afriforum were called the “White Black First Land First” by the ANC, were dragged across the flaming coals of Twitter, and were yelled at in parliament by the UDM for their assertion in parliament that the accusation that whites stole land was “the single biggest historical fallacy of our time”. The EFF’s Malema has since called for a one-on-one confrontation between the party and the group, and even the fairly right-wing ACDP said they were “disappointed” in them.

But, frankly, Afriforum should be used to it by now.