The Nelson Mandela Foundation says it is deeply 'offended' by the painting. 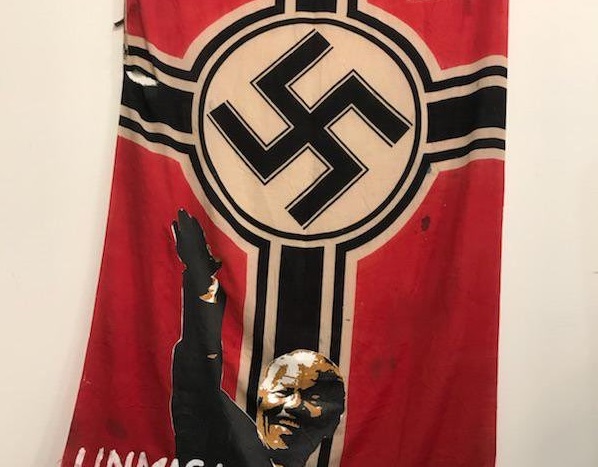 The artwork that has "offended" the Nelson Mandela Foundation. Picture: Twitter

Controversial artist Ayanda Mabulu has come under fire for his latest artwork which shows former president Nelson Mandela smiling on the Nazi flag, his hand raised in a Nazi salute and captioned with the words “Unmasked Piece of Sh*t.”

The Nelson Mandela Foundation spokesperson Luzuko Koti said they were considering options in terms of action to take against the artist.

He continued: “Over many decades and across territories and jurisdictions, artists have depicted, represented and referenced Nelson Mandela in their work.  The Nelson Mandela Foundation has no expertise in the arts and accepts that freedom of expression gives artists a creative licence which at times will result in work which is more or less disturbing.

“But there are limits. The work by Ayanda Mabulu which briefly was put on public display without due authorisation at the Joburg Art Fair today [which] in our view goes beyond the reasonable limit. We find it deeply offensive.”

The piece was showcased at the Joburg Art Fair which ended on Sunday.

Mabulu is no stranger to controversy as in the past he has painted former president Jacob Zuma with exposed genitalia, licking controversial businessman Atul Gupta’s behind.

He has also painted minister Nkosazana Dlamini-Zuma engaging in a sexual activity with her ex-husband Zuma.