Willem Petzer and Danie Barnard, two far-right vloggers, have had their racism exposed after their private chats were leaked. Willem Petzer (right) and AfriForum's deputy CEO Ernst Roets at the launch of his book Kill the Boer.

WARNING: The memes in this article may be offensive to many.

Two of South Africa’s far-right bloggers appear to have had their racism exposed after their messages to each other on gaming chat service Discord were leaked.

They are Danie Barnard and Willem Petzer. Both are well known for videos seeking to highlight the plight of white farmers in South Africa and white people in general.

Now a chat group hosted by Petzer, in which Barnard is an active member, has been exposed by Unicorn Riot, a US non-profit media organisation whose Discord Leaks have exposed hundreds of thousands of Discord chats from alt-right and far-right servers, most of which were in the US, but one of which was Petzer’s in South Africa.

In a video on Friday, Petzer responded to this article by saying that he was not the host of the Discord group in question. This seems unlikely as on Discord, usernames are unique and linked to the user’s phone number, and Petzer himself has mentioned the group in public. You can see his full response at the end of this article. The caption of Petzer with Mein Kampf also clarifies the context in which he was holding the book. 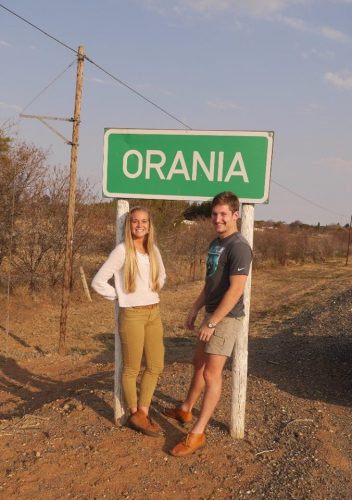 Willem Petzer and his partner Rene [the article originally stated she was his wife] outside whites-only town Orania. Willem Petzer with Adolf Hitler’s racist autobiography Mein Kampf, in which Petzer claims he was ‘actively speaking out against Adolf Hitler by comparing his demonising of Jews with the demonising of Afrikaners’. [Petzer’s quote added 28 September].

Petzer himself publicly boasted that his Discord server was “the best racist, sexist, homophobic, transphobic and Islamophobic chat in South Africa”. 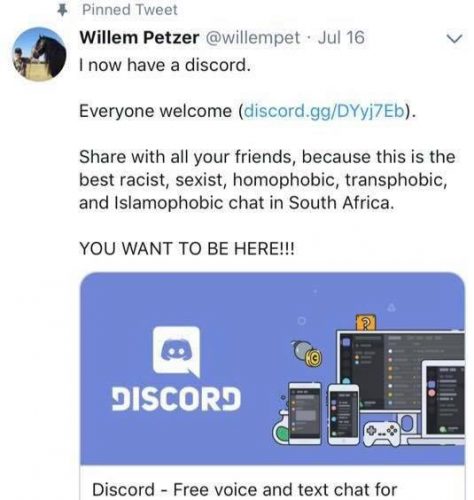 Memes posted by members of the chat are a mix of blatant racism, apartheid nostalgia and even overt Nazi symbolism. 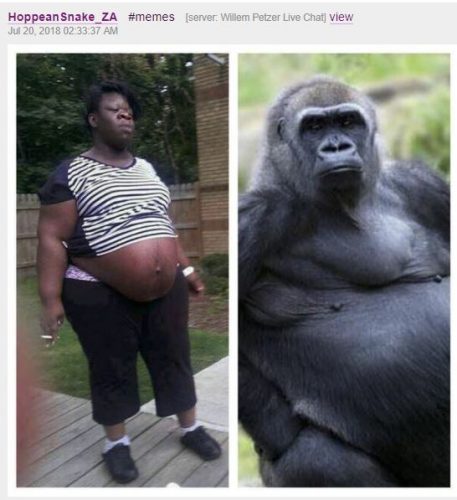 Not all of the memes are racist. Some are sexist instead. Petzer’s own chats in the group include his belief that anyone bothered by the k-word is an “extremely pathetic excuse for a human being”, his view that Mandela was a “horrible communist terrorist” and his advising those on the group to start fake profiles pretending to be black, with Petzer listing some ideas for authentic-sounding black names. Danie Barnard is a vlogger who has created the hashtag #BoerTestimony in an attempt to draw attention to farm murders.

In a YouTube video, Barnard says: “We do not try to spread any false information, nor are we right wing extremists or Nazis…” However, his posts on Petzer’s Discord chat group indicate that, while Barnard publicly denies being to the far right of the political spectrum, privately he is happy to display a level of racism and a nostalgia for apartheid on a par with Petzer’s. Barnard’s posts were under the name Daniebees, who we have confirmed is indeed Barnard. The first screenshot shows a post by Daniebees, and the second shows the same picture, published under Barnard’s public Facebook account. A source also told us that Petzer allegedly has a closed Facebook group called ‘Pofadder Pit’ with members including AfriForum’s Ernst Roets, Steve Hofmeyr, Freedom Front Plus leader Pieter Groenewald and Cape secessionist Carlo Viljoen. Roets says that he is “not aware” of the group and that if he is on it, he was added without his consent.

We are looking into this information and will publish a follow-up soon.

READ MORE: AfriForum distances itself from far-right vloggers and their racist memes

And earlier version of this article noted that to the group appeared to be supporters of Afrikaner lobby group AfriForum and that Petzer has collaborated with Roets on YouTube videos. Roets has distanced himself from the two vloggers, telling the Citizen that our linking them to AfriForum is a “very big stretch.”

You can see Petzer’s full response below:

An earlier version of this article included info on cartoonist Jeremy ‘Jerm’ Nell’s Discord server, which was also included in Unicorn Riot’s Discord Leaks. While this was meant as an aside, he felt that the article had linked him to the far right unfairly. He also felt we had wrongly interpreted a cartoon he had published. We removed the paragraph from the article.