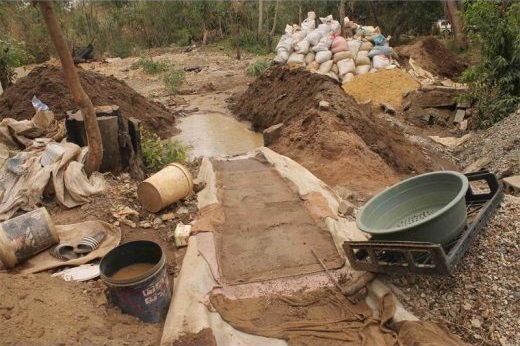 The major illegal mining operation in an open piece of land next to the R28 in Uitvalfontein. Picture: Randfontein Herald

Police on the West Rand made their intentions for the festive season clear when a large number of arrests were made during a joint Rural Safety Operation in Randfontein on Thursday, 1 November, reports Randfontein Herald.

Captain Ntlabidi David Maponya, acting Vispol Commander confirmed a total of 54 people were arrested following the discovery of the major illegal mining operation in an open piece of land next to the R28.

Those caught were searched for anything illegal – be it drugs or weapons such as firearms and knives. Numerous types of mining tools such as spades, shovels and pickaxes were confiscated.

“We are tired of crime,” said Brigadier Jacob Manamela, the Randfontein Police station commander during the early morning briefing.

He added that crime is a problem to all of us, and warned that those who find themselves on the wrong side of the law will be brought to book.

“We cannot allow criminals to take advantage of the community. It’s [almost] the festive season and I want our presence to be felt.”

Manamela added that crimes currently of concern to police include armed robberies, business robberies, theft of motor vehicles and hijackings.