Why selling our debt-trap SOEs would cripple SA – experts

It is also not sustainable for public money to be used every year to bail out these companies, with national debt already approaching R2.5 trillion.

South Africa’s struggling state-owned enterprises (SOEs) have been mismanaged into a debt hole, and they run the risk of crippling government’s contingent liabilities, experts have warned.

Selling them off, in light of the half-a-trillion-rand debt these companies are in, is not a feasible plan, while South Africa would be forced to pay up to R466 billion in guarantees should its state companies not be able to meet their debt responsibilities.

While the Free Market Foundation has repeatedly called for the privatisation of South African Airways (SAA), economist Professor Jannie Rossouw said ailing state companies such as SAA should serve as a lesson on the “reckless” dishing out of government guarantees.

This year government committed to a further R5 billion to the airline, which has outstanding guarantees amounting to R19 million.

“SAA has shown us that we should not be reckless with giving guarantees because when the time comes for payment and the SOEs cannot continue, government will have to pay all of that money,” said Rossouw.

“Government is dishing out guarantees on the assumption that they will not be called to pay, but if those SOEs were to shut down or could not meet their debt obligations, government would have to make good on those guarantees. Government should be much more circumspect before giving out any more guarantees.” 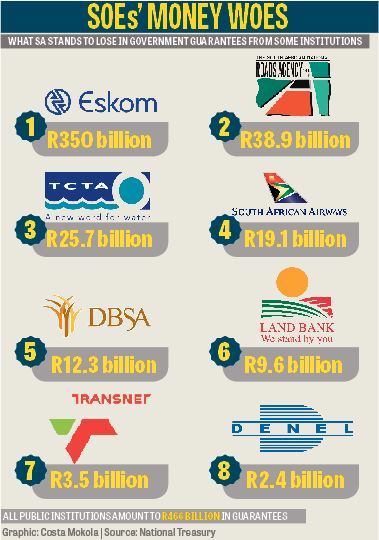 Another economist, Dr Kenneth Creamer, said corruption and mismanagement and, to a lesser extent, disruptive technological changes, had led to the bad performance of many of SOEs. It was therefore not sustainable for public money to be used annually to bail out these companies.

“It is imperative that a pragmatic approach be adopted – not driven by grand theories of nationalisation or privatisation – which seeks to restructure state-owned companies so that they can offer their core services to the wider population in a way that is financially sustainable,” said Creamer.

“As far as possible, we need to balance the interests of consumers with the interests of workers at these companies and with wider policy objectives, all subject to our country’s long-run financial sustainability.”

Creamer cautioned against the temptation to “overly politicise this matter” in favour of pursuing more pragmatic solutions.

Government debt has been a growing concern, as highlighted in the 2018 budget review, placing further risks to the state’s contingency liabilities.

National debt was approaching R2.5 trillion, according to National Treasury.

“The debts of SOEs have also increased rapidly,” it noted. “Several of these companies have large government guarantees and their long-term viability is a concern.

“Capital markets have reduced lending to some entities in the absence of meaningful reforms. Eskom’s financial position is now a major risk to the economy and the public finances.”