Gosiame Sithole's lawyer is set to apply for an urgent interdict in the high court on Friday, with regard to the custody of her client. 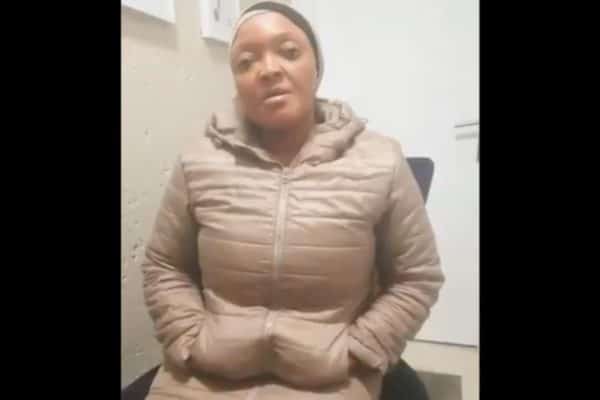 The mother of the 'Tembisa 10', Gosiame Thamara Sithole, has been taken to hospital for evaluation, her lawyer, Refiloe Mokoena, said on Thursday evening, 17 June 2021. Photo: Twitter screenshot/@pietrampedi

The mother of the ‘Tembisa 10‘, Gosiame Thamara Sithole, has been taken to hospital for evaluation, her lawyer, Refiloe Mokoena, told News24 on Thursday evening.

Mokoena says she received a call that Sithole had been taken to a police station in the early hours of Thursday morning.

“I went there and found her in the company of police officials, who refused that I speak to her. They told me that she is not under any arrest, but they are conducting an investigation into a missing person inquiry.

“They said they are waiting for the Department of Social Development [DSD] to assess her, to establish whether she is in a position to give a statement,” she explained.

Sithole ‘whisked away’ from lawyer by DSD

Mokoena says she was not allowed to be present during the conversation.

“She then came to me in the car and said that DSD has her twins and they want to take her to a place of safety, where her twins are, and she said no. But she is prepared to go and get her children. She was whisked away from me,” Mokoena said.

Mokoena added that DSD had arrived with a State attorney and an advocate.

A meeting was subsequently held between the parties.

Mokoena said she was told that she [Sithole] is a patient of the social development department, and that they “have a constitutional obligation to hand her over to any hospital of their choice for psychiatric evaluation in terms of the Mental Health Act”.

Mokoena says she consulted with her client and explained that she could voluntarily agree to go to the mental health institution. To which her client responded: “No.”

“She said she was not prepared to be taken for a mental evaluation; those were her instructions. She was there to assist the police on the question of whether she was missing or not. She said, no,” said Mokoena.

Mokoena said her client was not given a choice, and she was allegedly told that the part of the Act, which allowed this process to take place involuntarily, would be invoked.

Mokoena said she followed them to a hospital in Tembisa, where her client was taken to a mental ward.

She was granted no further access to her client.

The lawyer is set to apply for an urgent interdict in the high court on Friday, with regard to the custody of her client.

When approached for comment, the social development department’s spokesperson, Lumka Oliphant, said: “We are appealing to the media to give us space to finish the work of government. When this work has been completed, we will talk to the country.”

SAPS said it had no record of the detainment or arrest of Sithole.

The story of the ‘Tembisa 10′ took the country by storm when Pretoria News claimed that a woman had given birth to decuplets and, as a result, had broken a world record.

However, as the story began to gain momentum, various government departments, hospitals and social workers refuted the story.

After News24 reported that a missing persons case had been opened for Sithole last week, the Gauteng social development department denied that she was missing and claimed she was in a safe place, recuperating.

It said it had notified the police and would not comment any further on the matter until it was ready to do so.

The babies’ alleged father, Teboho Tsotetsi, said in a family statement earlier this week that he did not believe she had ever given birth to decuplets.

The family added that they had only ever relied on Sithole to inform Tsotetsi of the births.

Sithole finally broke her silence on Tuesday evening, accusing the Tsotetsi family of wanting to profit from her babies.

“No one will force me to reveal where my [10 babies] are. I will reveal their location in my own time, and no one is going to force me to tell where they are,” she said at the time.

Sithole, who did not appear to show signs of having given birth recently, kept her hands tucked in her brown puffer jacket as she spoke.