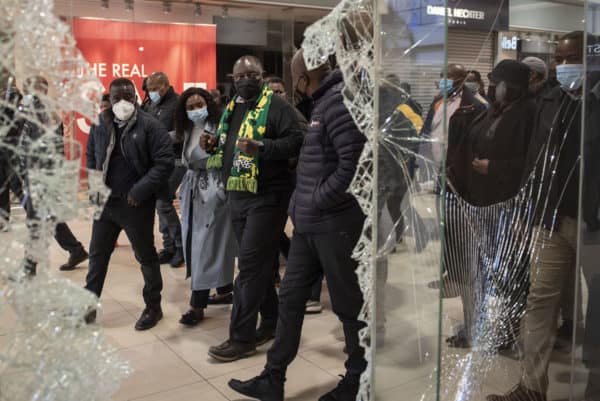 Every year the world joins in celebrating the life and times of late former president Nelson Mandela. The ANC and President Cyril Ramaphosa are doing their part in their celebrations on Sunday.

Ramaphosa is set to deliver a virtual Mandela memorial lecture as part of the ANC’s Mandela Day programme later this evening. In a statement, ANC spokesperson Pule Mabe said: “On this occasion, we urge South Africans to embrace Madiba’s values and honour his legacy through humanitarian acts and initiatives that acknowledge his never-ending quest to change the world for the better.

Police Minister Bheki Cele and his department are on the hunt for the instigators and failed insurrectionists after three arresting three people for allegedly orchestrating violence that swept through KwaZulu-Natal and parts of Gauteng last week.

Questioned by the media during his engagement with community members in Durban, Cele spoke about the available updates on any arrests on the instigators.

Former president Jacob Zuma’s lawyers have reportedly filed an application for the postponement of his arms deal corruption trial.

The trial is due to be heard virtually on Monday morning in the Pietermaritzburg High Court. But according to a News24 report, Zuma’s lawyer, Bethuel Thusini, filed an application on Saturday afternoon for the case to be postponed.

There could be major changes in the Kaizer Chiefs playing personnel in the next few days after the Naturena side lost the Caf Champions League final to Al Ahly on Saturday.

Some of the Amakhosi players, including captain Bernard Parker had been given one month contract extensions with talks on further extensions expected to start next week.

At just 24, Morikawa claimed his second major thanks to a bogey-free round of 66 to finish on 15 under par.

The American had never even played in links conditions until last week’s Scottish Open when he tied for 71st, the worst finish of his professional career.

After making their relationship official, at first, denying it, actress Natasha Thahane who is coupled up with Orlando Pirates Thembinkosi Lorch, can’t help but show where her loyalties lie.

Thahane wished the team good luck before the game, but she has hilariously hinted that she wasn’t supporting Amakhosi despite some of the nation coming together to do so.