The racist graffiti on the Nobel laureate's mural has drawn outrage across South Africa. 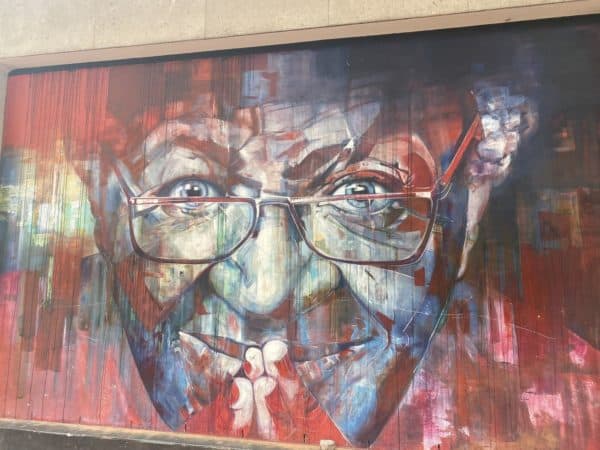 A mural of Archbishop Desmond Tutu in Cape Town has been defaced with a racist slur. Picture: Twitter/Brett Herron

The Archbishop Desmond Tutu IP Trust has condemned the racial slur written on the Desmond Tutu mural in the Cape Town CBD, saying it casts a shadow on South Africa’s democracy.

The trust’s acting chairperson Mamphela Ramphele said Tutu was often threatened during apartheid and for it to happen again decades later is “loathsome”.

“It speaks to the work still ahead to complete the journey, his journey, to restore our humanity,” she said.

“Racism is a curse South Africa must escape. We have enough problems on our plate, including radical inequality in wealth and living standards still largely tracking the social, economic and environmental hierarchies of the past.”

Ramphele described the racial hatred Tutu received during apartheid, saying his family received horrible phone calls. The archbishop was also the target of graffiti and a baboon foetus was even hung outside the family’s home, allegedly to bewitch him..

The discovery of the vandalism on the mural comes two weeks before the Tutu turns 90. “Ek is ‘n k*****” was written over the painting.

According to IOL, the racial slur was discovered by videographers Wesley Fester and Saamwiet Moos. They initially couldn’t believe what they had seen.

“We had to do a double take. I saw it out of the corner of my eye. And then I stopped Wesley and said, check what someone did here. We were baffled. It took us a bit of time to process it. And then we filmed it,” said Moos.

“It’s not like the Arch has a questionable past. So it is a bad reflection on whoever wrote it,” added Moos.

The racist graffiti has drawn outrage across South Africa.

Brett Herron, the secretary-general of the GOOD party, said the culprit “must be identified and prosecuted”.

He also urged the police and the City of Cape Town to work together to catch the vandal using the city’s security cameras.

There was plenty of condemnation of the vandalism on Twitter.

NOW READ: No more pretending: We need to talk about racism