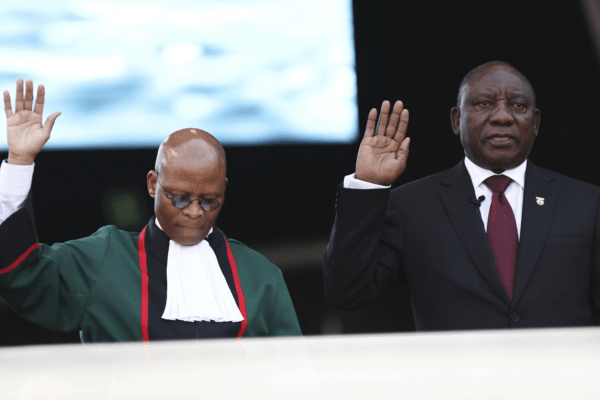 President Cyril Ramaphosa has expressed his appreciation to outgoing chief justice Mogoeng Mogoeng for his service to the nation as the head of the country’s judiciary.

Ramaphosa wished Mogoeng well in his retirement as his 10-year tenure as South Africa’s chief justice came to an end on Monday.

In a statement, the president paid tribute to Mogoeng and praised him for “endowing South African jurisprudence and the democratic order more broadly with judicial integrity and resilience which has impacted positively on the lives of citizens and advanced accountability”.

He said after a decade of outstanding service and leadership, the chief justice left a rich legacy for the country’s democratic culture, judiciary, the legal profession and ordinary South Africans.

“Chief Justice Mogoeng’s leadership inspired a judiciary that was fearless in holding those in power to account and empathetic to the plight of individuals and groups in our society,” Ramaphosa said.

“This has deepened international regard for South African jurisprudence, for the integrity, effectiveness and efficiency of our democratic institutions, and for the separation of powers enshrined in our Constitution.”

Ramaphosa said Mogoeng presided over the judiciary during a decade which was challenging in many ways, but during which South Africa’s judiciary held firm and enabled the renewal of society.

“Having served the nation with such distinction since September 2011, Chief Justice Mogoeng is now able to devote himself to more his personal interests, even though we know he will continue to be an important figure and voice in public life. We wish him well.”

Who will be SA’s next Chief Justice?

With Mogoeng’s term of office coming to an end on Monday, the race is now on to appoint the country’s next head of the Constitutional Court.

Last week, the Presidency released a shortlist of eight candidates who are vying for the top job.

South Africans have until 15 October to submit in writing any objections they may have regarding the nominees to the nominations panel appointed by Ramaphosa in September.

The panel, chaired by Judge Navanethem Pillay, will then consider objections before submitting a shortlist of three to five names to the president by 29 October for consideration.

READ NEXT: Mixed reactions from political parties over nominees for next chief justice