Jacques Pauw says he has been in possession of documents from the SSA since 2014. 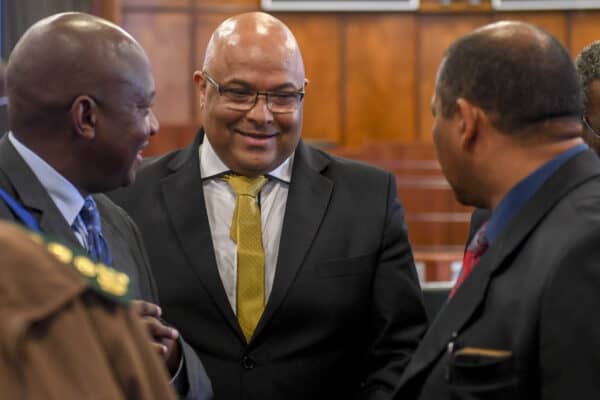 This is after a News24 opinion piece questioned Fraser’s influence over the SSA.

Fraser – who is also the former director-general of SSA – is suing investigative journalist and author Jacques Pauw for defamation.

The former prisons boss is demanding R35 million from Pauw and NB Publishers for the allegations stated in the author’s The President’s Keepers book published in 2017.

This follows Pauw handing over copies of allegedly classified files back to the SSA on Monday.

SSA acting director-general Gab Msimang had demanded that the classified documents be returned “with immediate effect” as they were intended to be used as evidence in Fraser’s lawsuit against Pauw.

The SSA said the documents were not supposed to be held by third parties as per the Protection of Information Act.

The agency has also defended itself, saying the opinion piece had misleading claims, and painted the picture that it was aiding Fraser.

Msimang said that the SSA was “acting in terms of its legal obligations and not to shield or take sides with anyone in their private legal battles”.

“I have a duty in terms of the Intelligence Services Act to protect the identities of members, methods of operation and classified information from unauthorized disclosure” the acting director-general said in a statement on Thursday.

“As a matter of fact, we have been in discussion with the legal team of Mr. Jacque Pauw and have agreed on certain protocols in terms of how that information must be handled going forward.

“It is therefore both mischievous and opportunistic to suggest that the Agency is shielding or aiding anyone in this regard.

“The obligation to protect classified information is sacrosanct and anyone who is in possession of such information is breaking the law and will be dealt with as such,” Msimang added.

‘Hide behind a crime’

Speaking to CapeTalk on Tuesday, Pauw said he has been in possession of the copies since 2014.

“I’ve always made no secret of the fact that I’m in possession of [SSA] documents. My perception has always been that you can’t use intelligence legislation to hide behind a crime.

“These documents don’t reveal any state secrets. All it does is to tell us all the abuse, the theft and fraud that took place at the [SSA],” he said.

Pauw suggested that the SSA demanded the copies back after Fraser wrote to President Cyril Ramaphosa and Msimanga informing them that the author was in possession of the documents.

“After I published my book [in 2017], Fraser sued me for R35 million for defamation. And he said a company he had went under as a result of my reporting.

“[For] four years and absolutely nothing happened and [at] the end of last year he then wrote a letter to President Cyril Ramaphosa.

“The next moment we get a letter from acting director-general of the [SSA] and he demanded the documents back. He said we were illegally in possession of these documents. That’s what they come to fetch on Monday at the attorneys office. We still intend on using these documents in the defamation case,” the author added.

Fraser was implicated in wrongdoing by some witnesses the Commission of Inquiry into Allegations of State Capture, specifically about the R600 million Principal Agent Network (PAN), among other accusations.

The PAN had also become a talking point when The President’s Keepers was released.

According to Pauw, a PAN was simply jargon for spy handlers – people who engage and manage other spies on behalf of the SSA.

In the book, the PAN was described as another parallel intelligence structure that allegedly spirited away nearly R1 billion in state funds over three years, and diverted the intelligence mechanisms of the state to Fraser.