Evacuation protocols for guests have been criticised, with claims that no hotel staff were assisting anyone in getting to safety. 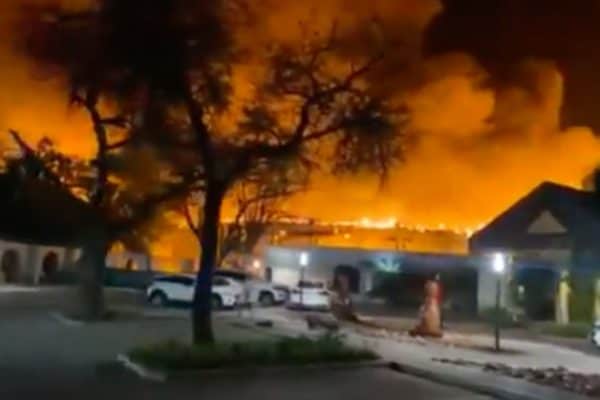 The cause of the fire is under investigation, and so far, no injuries have been reported. Photo: Twitter

Police and firefighters attended to a fire that broke out early on Wednesday morning at the Mmabatho Palms Hotel in Mahikeng, North West.

So far, no injuries or deaths have been reported.

The blaze is significant, however, with indications that the hotel – which is also a casino – will be badly affected.

The resort is a four-star-rated destination, and is situated adjacent to the Leopard Park golf course.

eNCA interviewed Deputy Minister of Agriculture, Rural Development and Land Reform Nokuzola Capa, who told the the channel she was in the hotel when she awoke around 1am to heavy smoke.

She said she assisted other guests to escape the hotel amidst the chaos. She added that there were no hotel staff directing any guests to a safe assembly zone, and criticised the lack of evacuation protocols and alarms.

It is also being reported that some guests were stuck in their rooms.

Investigations are set to commence as authorities are able to access the hotel.

South African National Civic Organisation (Sanco) in a statement called for a thorough investigation into the cause of the fire, especially in light of “high-profile people of government” having slept there overnight when the blaze broke out.

North West Premier Bushy Maape, who was sworn in just one day ago, confirmed to eNCA the damage was “extensive”.

Maape also said the fire was a setback for the province’s tourism sector.