Psychologist Rosalind McNab said in court she believes Marcel Steyn can be reintegrated into society, with therapy and medication. 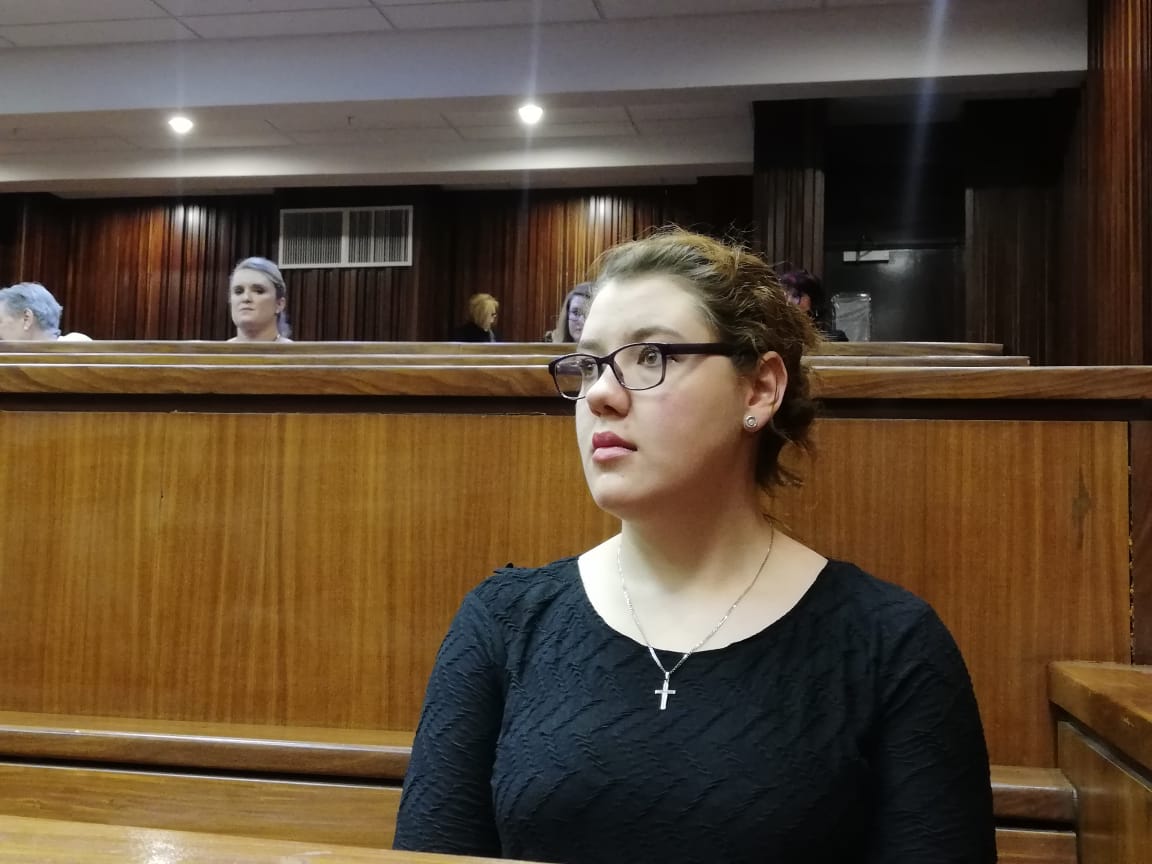 In Tuesday’s testimony, psychologist Rosalind McNab, who was testifying about the youngest of the “Krugersdorp Killers”, Marcel Steyn, told Judge Ellem Jacob Francis that she believed Marcel was truly remorseful, and came clean in the true sense of the word, Krugersdorp News reports.

Judge Francis was intent on falsifying claims that remorse was faked with the remaining members of the group, with the focus on Marcel Steyn.

When asked if Marcel’s tears while testifying could be seen as remorse, McNab said, “Definitely”, especially because she knew Mikaela Valentine. She did not know the other victims.

When asked if she was remorseful towards the families in court during her testimony, McNab said she saw a lot of faking in the testimonies given during the trial, but not with Marcel.

ALSO READ: ‘Krugersdorp Killers’ back in court for pre-sentencing

State Prosecutor Gerrit Roberts said that Marcel’s defence was based on compulsion, but McNab’s report appeared to show that it was fear, namely of her mother and Cecilia. He asked how this difference could be explained.

“The report is based on a psychological evaluation,” said McNab.

The state prosecutor put it to McNab that Marcel only once showed emotion while testifying.

McNab said that when interviewed, Marcel gave answers in a matter-of-fact way. The experience was traumatic for her, and she dealt with it in ways that would help her cope. But McNab agreed that Marcel was unemotional.

Roberts said what he could not understand was that the Steyn children were not allowed to watch the Harry Potter movies, but they were forced to watch Satanic movies. McNab replied that this was part of the brainwashing they were subjected to.

Roberts asked if Marcel saw where the trial was going after Cecilia had testified, and used her “telling the truth” to try and help her in the long run. Although Marcel admitted to the crimes, she said she was forced to commit them. Roberts said that the reason given in the report was being belittled and fear, and stated that that was not a good enough excuse to commit murder.

McNab explained that Marcel murdered because she was controlled, and not just ridiculed. She would have stayed at school for hours because she would hate going home and being part of planning the murders. She was under the influence of Cecilia and her mother and was told to do these things.

Roberts asked if McNab’s report was not perhaps based on a lot of loose interpretation, also asking if she was aware that another psychologist was also approached for a report.

He wanted to ask McNab to respond to the other report, which had been provided by the defence, but neither the witness nor the report were used.

Roberts asked McNab about remorse, as she had also dealt with it in her report. The other psychologist’s report touched on the idea of remorse, and said the accused stated that although her brain told her what she did was wrong, she tried not to get emotional about it because if she let her emotions take over, she might not be able to handle it. According to the accused, she tried to show emotion in court.

Growing up, her mother never allowed her to show emotion because that meant she was weak. The report went on to state that Marcel did not express sincere remorse, and that could be because she was never shown what true remorse looks like – she only knew fear.

Further, the second report stated that Marcel felt emotions towards the victims because they were taken from their families, but felt no emotion about the crimes. Marcel also said that she looked forward to walking outside and seeing the stars again.

McNab said the second report was written by a social worker, with the added advantage of knowing the law, but was not a psychologist. Roberts asked whether McNab thought Marcel was addicted to drugs. She said Marcel was addicted to drugs including marijuana, but that she did not use drugs during the time of her matric exams because she was afraid they would test her.

Roberts said that this made him think that Marcel was a meticulous planner. McNab said she agreed – Marcel did think things through, but she did not always have the last say.

When asked if there was compelling evidence that the minimum sentence should not be imposed, McNab stated that, considering the trauma experienced by Marcel during her childhood, and being exposed to Satanism and cult group activity from the age of 10, provided a lot of compelling evidence.

McNab said Cecilia was a pathological liar, master manipulator and a good actress and had used that to manipulate Marcel. She went on to reiterate that Marcel was forced to watch movies about Satanism, and that she had said she actually saw Cecilia’s teeth grow.

Being exposed to these elements as a child would have been traumatic, according to McNab.

McNab then spoke about Cecilia and her childhood, and how she was rebellious even as a small girl. Judge Francis asked her where she got this information from, as he could not remember testimony stating that.

“At one stage I was asked by Carte Blanche to give my opinion about Cecilia and her formative years. That is where I got the information about Cecilia’s childhood,” said McNab.

The judge said that he would like to divorce the hearing from what happened in the media, as he does not read or watch any news regarding the case.

Roberts then asked Macnab about the period of two years before the double murder. He wanted to know what happened during that time.

McNab said that even during the time when the group wasn’t committing murders, Marcel would still have been affected by the cult.

Although she would have matured, she would not have made independent decisions.

McNab continued that apart from the group, Marcel was isolated from any other relationships. She explained that Marcel’s relationship with her mother was strained because of her testimony, but that she still talked to her brother and father. She has also made a few friends since being incarcerated, the court heard yesterday.

Because Marcel was not involved in every crime committed, McNab limited her discussion to those in which she was involved.

McNab then continued to explain Marcel’s involvement in the various crimes. She said that cults tended to appeal to the part of a person who wanted a better world. The leader of such a cult would use various methods to persuade those around them without them knowing, and outlined some of the ways that some cult leaders would typically manipulate those around them.

She said cults often recruited intelligent, caring, and motivated people. Cecilia used numerous methods of intimidation in her Electus Per Deus group. Marcel said that Cecilia was her role model and was special because God spoke to her.

The members of the group dressed like Cecilia and all had matching tattoos, as part of Cecilia’s manipulation. Marcel told McNab how Cecilia knew what she was doing outside the home, and this made her believe Cecilia could astral project and would keep an eye on her the whole time.

This reinforced the mind control and manipulation that Cecilia and Marinda had over the group. McNab said she believed that Marcel genuinely feared ending up like Mikaela Valentine if she had tried to get out of the group talks about the crimes.

Both Marcel and her brother were told that family demons would possess them if they visited their father or other family members. These demons would then endanger the orphans, they were told.

Marcel told McNab that she did ask if there was a way they could get money without killing someone, and she was told she had doubting demons.

McNab said that while Marcel had a high IQ, her low EQ (emotional quotient) made it possible for others to manipulate her.

McNab called Marcel a model prisoner, stating that she even helped out in the office at the prison where she was incarcerated.

The judge mentioned that he had heard that all three, Marcel, Cecilia and Zak, were model prisoners, and asked what he should make of that information.

Marcel told McNab she never wanted to do anything to get into trouble again.

When she discussed the victims, she said doubting their motives was like treason.

“By doubting, we were either doubting God or Cecilia,” Marcel said to McNab.

McNab explained that a lot of cults used religious components as a way to recruit members and get them to do what they wanted. She explained this after Judge Francis asked if the group was not Christian.

She explained that there were similarities between her research and the group. Marcel said she only once questioned the group, but because of the remorse she felt when she realised what the group had done, she had to tell the truth when testifying in court.

McNab said that if Marcel had not seen through the group’s lies, she would probably have continued to believe Cecilia and Marinda.

Judge Francis then asked how Marcel could say she felt remorse, and what would she have done when testifying if she had not come to the realisation that what had been done was wrong.

McNab continued with her report, saying that in prison, Marcel was told to not look to the past because you cannot change it, one should rather look to the future.

She said that Marinda’s personality could be described as controlling, dominating, uninvolved, physically abusive and aggressive, emotionally and mentally abusive, an occult follower, uninvolved parent, irresponsible and more.

When asked to list feelings from her childhood, Marcel used words like fear, isolation and confusion. When one of Marcel’s school teachers noticed her marks dropping from 90% to 60%, she had asked Marcel what was wrong, whereupon Marcel burst into tears. Marinda told one of the teachers that Marcel’s marks were good enough when she was confronted at a teachers’ evening. Marcel wanted to become a doctor.

McNab said that Marcel was raised in a dysfunctional family, and through her mother’s involvement in a religious group, was manipulated into taking part in these crimes.

“Her involvement in the murders started when she was 14, and she was never afforded the opportunity to live her life as a healthy teenager,” said McNab.

A prison warden has allegedly been teaching Marcel true biblical principles, and she is said to be using her prison time to further her studies.

McNab believes that Marcel can be reintegrated into society, and would benefit from long-term therapy and drug intervention. She believes this should start as soon as possible, while she is still in prison. She explained that there were structures in place to assist Marcel once she comes out of prison, and she would be able to reintegrate with a community.