Mostert was arrested at the Menlyn Maine shopping centre in September 2019 after he allegedly tried to rob an Absa bank. 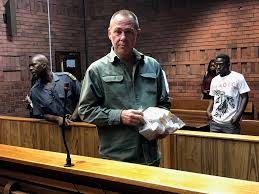 The former Scorpions investigator accused of attempting to rob a bank at the Menlyn Maine shopping centre in Pretoria last year has been found fit to stand trial.

This was revealed in the Pretoria Magistrate’s Court on Friday after Ekhardt Albertus Mostert, known as Mossie Mostert, spent a month in Weskoppies Psychiatric Hospital for observation.

Mostert’s attorney, Oelof de Meyer, confirmed to News24 the psychiatric report had found he could be held culpable, was fit to stand trial and would be able to follow proceedings.

The case has been postponed to 14 April, where it is expected it would be finalised. It is understood a plea agreement has been discussed with the State and investigating officer.

During his first court appearance, he told the court he wanted to defend himself and then, without being asked to, said he wanted to plead guilty.

His attempt to enter a guilty plea was not accepted at the time due to outstanding paperwork.

Mostert initially faced charges of attempted robbery with aggravating circumstances, terrorism and the contravention of the Protection of Constitutional Democracy against Terrorism and Related Activities Act.

However, the terrorism charges were later withdrawn.

Before Mostert was admitted to Weskoppies, he was examined by a district surgeon in September 2019.

According to the district surgeon’s report, he was able to understand the gravity of the offences he allegedly committed.

The report also indicated he would be able to follow the court case, he understood the implications of a possible conviction and could describe the circumstances of the alleged crime as well as recall relevant facts.

The district surgeon noted Mostert did not suffer from any delusions, amnesia or hallucinations.

However, it was revealed he suffered from psychosis, depression and post-traumatic stress disorder. The report also indicated a psychologist and psychiatrist treated him for these disorders.

Mostert was arrested at the shopping centre in September 2019 after he allegedly tried to rob an Absa bank.

According to the police, he entered the bank at around 11.15am and walked straight to a bank teller where he handed over a note.

It is alleged he had disguised himself by wearing a wig and entered the bank with a device in his possession, which he later claimed was a bomb.