Five Free State officials accused of corruption worth R245m, out on bail

Dodgy dealings linked to officials implicated in Vrede Dairy scandal have been exposed after five agricultural and rural development department officials were released on bail. 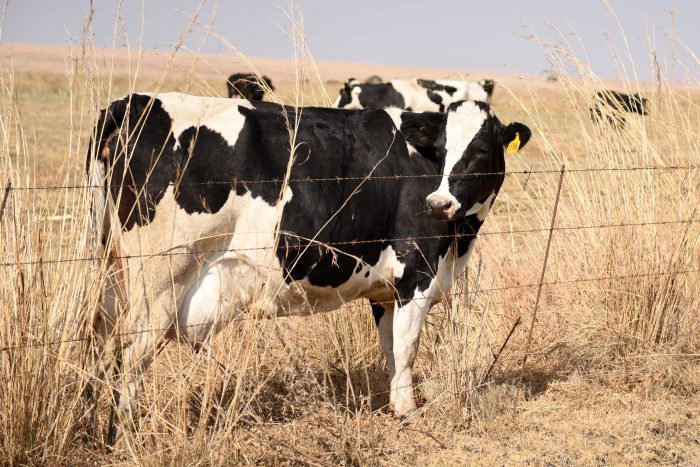 Dairy cows on the farm during a site visit by the DA. Picture: Neil McCartney

Five Free State government officials who were on Monday arrested and charged with hundreds of millions of rands worth of graft, have been released on bail.

The former Head of Department for Agriculture in the province, Mbana Thabethe, on Tuesday appeared in the Bloemfontein Regional Court alongside four of his one-time colleagues – Lerato Mngomezulu, Mokemane Ndumo, Mahlomola Mofokeng and Disebo Masiteng – on charges of fraud, corruption and money laundering to the tune of R244 million.

They were granted bail of R10 000 each and are due before a magistrate again next month, when they will be joined in the dock by two more suspects who were arrested in connection with the same case in July.

The Hawks said in a statement on Monday that these arrests had come as a result of certain “irregularities” being uncovered during the course of investigations into the Estina dairy scandal.

The charges were discovered while analysing the financial flow of bank accounts involved in the Estina dairy farm saga, a Gupta-linked project in the Free State. The investigation found there to be “irregularities and disguised payments to one of the officials.”

“The allegations against the five suspects relate to a company known as Superior Quality Trading, which also trades as Rekgonne Community Projects,” Hawks spokesperson Captain Lloyd Rampvha said in the statement.

“In June 2014, Rekgonne Community Projects entered into an agreement with the Free State department of Agriculture and Rural development to implement all projects on behalf of the department for two years. Between 2012 and 2016, the department is said to have paid more than R244 million to the company.”

The National Prosecuting Authority’s Sipho Ngwema in another statement said that the company in question had not attended any of the compulsory briefing sessions it was required to. Despite this, the company was even granted a certificate of attendance, and received more than R756 million from the Free State agriculture and rural development department.

“It is further alleged that the director of Superior Quality Trading, Lenah Mohapi, paid huge sums of money into the account of Seipati Dlamini, who was the Chief Financial Officer of the department at the time. These payments were disguised as ‘Refund Telkomsa’ and ‘Medical services’,” Ngwema explained.

The Hawks swooped on Dlamini and Mohapi back in July. They too were released on bail of R10 000 each shortly afterwards.

Their case has been postponed to 10 September.

Mohapi and Dlamini will join Mngomezulu, Masiteng, Ndumo, Mofokeng and Thabethe in the High Court in September, and will collectively be facing 58 counts of forgery, uttering, fraud, corruption, money laundering, and contraventions of the Public Finance Management Act.