The Bakker family were left emotionally devastated after they were tortured for two and a half hours by six armed gunmen. 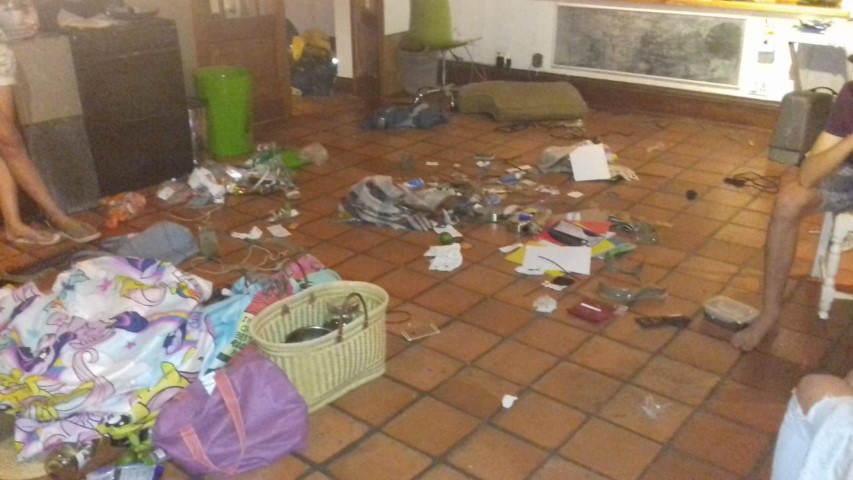 The scene after robbers ransacked the Bakker farm.

Intruders entered the Bakker farm on Saturday evening while Matt and his father Peter were cooking a meal downstairs.

“We live upstairs and our door was locked. My dad had left the kitchen door unlocked,” Matt told Lowvelder.

The men entered through the kitchen door, grabbed Peter and started strangling him. They tied his hands behind his back with masking tape. “The men asked my father if there was anyone else in the house. My father told them that his son and his family were upstairs. The men then dragged him upstairs.”

Matt, his wife, and his three children were playing cards in the lounge upstairs.

The men barged in and ordered the family to lie down on the ground. They were tied up with masking tape and cloth was stuffed into their mouths and taped over, except for the youngest child.

The suspects then started their long night of intimidation and torture. “They started asking us where our guns and cash were. We have never owned guns. We don’t believe in firearms. We told them we not like other farmers. Our family runs an HIV orphanage and is entrenched in helping the community around us.”

The suspects did not believe the family, so they placed a plastic bag over Peter’s head and started suffocating him. The suspects did this twice while cross-questioning the Bakkers. “They started saying they going to rape my wife and my daughter if I didn’t tell them where the guns were.”

The worst part for Matt was when they took one of his sons away to get keys to open a locked door. “My heart sank, as I couldn’t see what they were doing with him. Then they brought him back. The room is my wife’s music room. They didn’t take anything from it. All they wanted was money and guns.”

Next, they took Peter into another room and told the family that they were going to kill him. The men started ransacking the house. “I think they finally started to believe us that we didn’t have these things. They told us they were going to go after their informant, who was someone who used to work for us.”

Matt’s eldest managed to subdue the suspects after he spoke to them in fluent siSwati. “I think this helped us, as they seemed to calm down when they heard he could speak the language.”

The suspects then tied up the family with electric chords and left in their white Audi station wagon. “My father’s legs were not tied up so tightly, so he managed to loosen them and hopped over us. We were relieved to see he was alive. He then started biting through my daughter’s masking tape as they had not tied her with wires. This took about 10 to 15 minutes. Finally, she was loose and managed to get to the kitchen to get a knife. It took about another 45 minutes for us to free ourselves. I had no more feeling in my hands.”

He said the police recovered their vehicle in KaMagugu. “The last we heard from them was when my bank alerted me on Sunday morning that my bank card had been used in Hazyview. We assume they were on their way to Bushbuckridge.

“We, as South Africans, need to learn the concept of ubuntu. We are all human beings who share suffering, pain, joy, happiness. We need to help our brothers and sisters and care about one another. South Africans have so much love to give, yet our news is filled with all the negativity and hatred. Let’s focus more on doing the best we can, individually, to heal this country instead of bemoan our troubles.

“We all experience suffering in one way or another, but we can only heal through helping others. Archbishop Desmond Tutu said, ‘We are wired to be caring for the other and generous to each other’,” concluded Matt.

Hi-Tech Security Barberton owner, Sakkie Dednam said they were called out after the incident happened on the Bakker farm.

In another incident in the area, Col Johan Engelbrecht said an elderly couple, believed to be in their late 70s, were robbed on a plot outside Barberton on Friday at around 4pm. “Two suspects entered their house. The one pushed the elderly lady over. The men took two firearms. She had to have stitches for her injuries. The men did not tie them up.”

No arrests have yet been made in both incidents.