The pangolin was found stuffed in a yellow bag in the boot of the suspects' car, with plans allegedly made to sell the animal for R500,000. The pangolin was found in a yellow bag in the boot of a car at the Engen 1-Stop on the R21 south. Photograph: Benoni Flying Squad.

Four suspects were nabbed at the Engen 1-Stop on the R21 south in Kempton Park for being in possession of pangolin, which is an endangered species.

The arrest was the result of a joint operation between Benoni Flying Squad and National Crime Intelligence, reports Kempton Express.

This brings the total of pangolins rescued in the area in recent months to three, said WO Grant Giblin, spokesperson for Benoni flying Squad.

Giblin said a pangolin was recovered at Irene Mall on August 5 last year where one suspect was arrested, and another on October 23 last year at Oakmore Railway Station. Four suspects were arrested then. 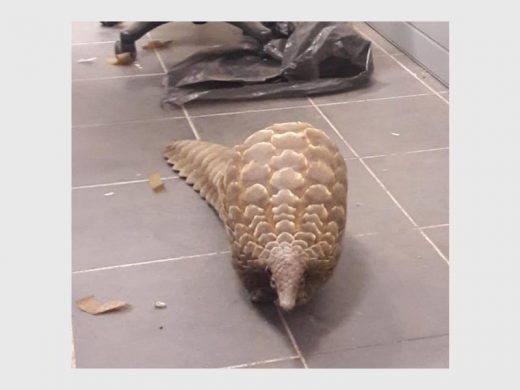 The pangolin at Kempton Park Police Station before being taken away. Photograph: Benoni Flying Squad.

In the latest incident, the pangolin was found stuffed in a yellow bag in the boot of a grey Nissan Primera. The four men in the Nissan were immediately arrested and their vehicle impounded.

“It is believed the suspects were trying to sell the animal for R500,000. It is suspected that the animal spent about a week in captivity without free movement,” said Giblin.

The pangolin was inspected by a veterinary surgeon and handed over to a member of Johannesburg Wildlife Hospital, where it will receive further attention.

The suspects, aged between 27 and 36, will appear in Kempton Park Magistrate’s Court facing charges under the National Environmental Management Biodiversity Act of 2004.