Lethal attacks by school pupils are due to a culture of no accountability, an expert says, while others say it's time to stop treating school-going criminals like children. The family of Kulani Mathebula, who was stabbed to death near his school, Mondeor High School, south of Johannesburg, watches his lifeless body being loaded into an ambulance, 13 March 2018. Picture: Nigel Sibanda

In the wake of reports that three teenagers have been arrested for a fatal stabbing in Mondeor, there have been calls to stop treating school-going criminals like children, Gauteng education MEC Phanyaza Lesufi has said, and an education expert agrees with him.

A 13-year-old suspect was arrested yesterday, with two aged 15 nabbed early this morning.

The two 15-year-old suspects were arrested in Soweto and Naturena, said police spokesperson Captain Kay Makhubele. Yesterday he said the first suspect was nabbed after police formed a team of detectives who followed up on information from the scene, which led them to another school in Mondeor where the 13-year-old suspect was in attendance.

The Mondeor community awoke to the grisly scene of the fatal stabbing of 19-year-old pupil, Kulani Mathebula, yesterday morning on a street he and other pupils used to walk to school every morning.

Neighbours described the incident as a senseless and brutal murder in a “quiet” suburban street. Just 200 metres from a police station, the Grade 11 pupil’s body lay lifeless yesterday morning as his mother, Dumi Chauke, 36, wailed inconsolably, calling her son’s name as his body was loaded into the forensics vehicle.

Principal at Mondeor High School, Vangelia Nicolaou, was one of the first people on the scene. Mathebula had a pulse, she said, but she could see that he was “going”.

According to some residents, Fernhurst Road was becoming increasingly notorious for muggings because it lies along a river flanked by thick foilage from which assailants can pounce on children walking to school.

Yesterday morning, however, speculation was rife this may not have been an ordinary mugging. 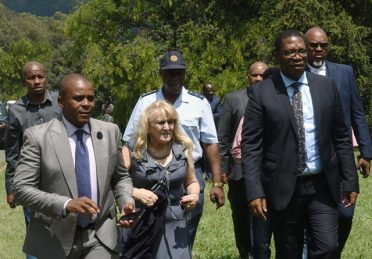 Reluctant to call it a suspected mugging or the result of a fight among pupils as some reports speculated, Lesufi did reveal that three pupils from other schools were placed on the scene, according to CCTV footage seen by himself and the police.

Lesufi added that the provincial department was increasingly under pressure to deal with school-related crimes, which often led to pupils dying.

He was planning to be part of a team which would approach parliament later this year to strengthen legislation around school-related violence.

“As Gauteng, we are going there to make sure that the legislation has teeth that bite and also to deal with misbehaviour in our schools. Gone are the days where we have to treat these criminals as children. People that can kill are no longer children. We need to respond correctly.”

Prof Corene de Wet from the School of Open Learning at the University of Free State said government was presiding over a society which lacked accountability and consequence management at every level.

“What is happening at the moment is absolutely the result of a culture of no accountability. This is something that involves pupils who come from homes where there are no rules and they develop an attitude where they can do what they want and there will be no consequences,” she said.

“Many of these pupils are still of compulsory school-going age and so all schools can do when they pick up that they are violent, is to send them home for a few days.”

“We can’t deal with them like ruthless criminals, they are still our children. Whatever action we take, we take that into consideration. We cannot treat them like they are criminals,” said Masha.

A murder docket was opened at the Mondeor police station.

Pupils were expected to receive counselling this week after the news of Mathebula’s death was broken to them. Mathebula was the grandchild of renowned musician Dr Thomas Chauke.