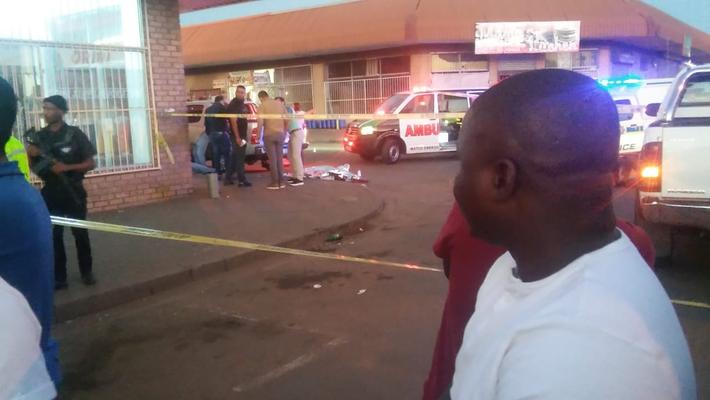 The crime scene where a man thought to be a witness in the murder case against the Newcastle mayor was gunned down on Sunday, 12 May 2019. Picture: Supplied

Political violence in KwaZulu-Natal (KZN) is not escalating, but dying down, according to the ANC, despite the gunning down of two ANC members in Newcastle on Sunday.

One of the victims was believed to be a witness in another ANC-related murder case involving a mayor.

Former treasury of ANC eMalahleni Region, Martin Sithole, and his friend Mafika Shange became the latest victims in a spate of political killings that have ravaged the province since before last week’s election.

In March this year, two mayors – Mluleki Ndobe and Ntuthuko Mahlaba – were arrested after being linked to political killings in the province.

One of the politicians who died in Sunday’s attack was believed to be a witness in the case involving Ndobe, who is the mayor of Harry Gwala district municipality.

According to ANC provincial spokesperson Nomagugu Simelane-Zulu, the party had confirmed yesterday afternoon that the two victims were long-standing members of the ANC and sent their condolences to their families.

Simelane-Zulu was unwilling to comment on whether the ANC would conduct its own investigation into the two incidents.

“Firstly, the ANC cannot involve itself in any criminal investigation. That would be a matter of allowing the law to take its course. We do call on law enforcement agencies to attend to this matter urgently. However, we do applaud the fact that one suspect has already been arrested.”

But Simelane-Zulu said it would be remiss to say that violence in the province was escalating at this stage.

“There was a comrade that was attacked by the IFP in Harding. It was not a shooting but it was one of our comrades who was a victim,” she said. “But I do not see the political killings mounting at the moment. In fact, we have had worse and as far as we are concerned things are actually beginning to die down.”

A ministerial task team led by Police Minister Bheki Cele was set up last year to investigate over 160 murder cases believed to be politically motivated, leading to over 160 arrests to date.

“We are worried about the killing of political leaders in the province and the fact that there had not been any leads in any of those cases until we agreed that the president sets up a ministerial task team to look into these cases. Now a few of them have been attended to and seven of these cases have been closed,” said Simelane-Zulu.

IFP national spokesperson Mkhuleko Hlengwa said the party was not investigating whether any of its members were involved in political killings in the province.