Friends of the victim asked the officer what he had done to warrant being shot, to which he responded that he ‘looked like someone else’. 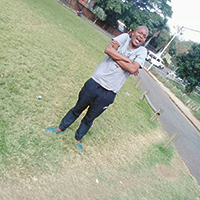 Msizi Mpazela, who was shot by a police officer after a night out with friends. Image: Supplied

A night out ended traumatically for the Mpanzela family in Harding, KwaZulu-Natal, after 23-year-old Msizi Mpazela was allegedly shot by police officers, reports South Coast Herald.

The officers were called to investigate a complaint of assault at a local tavern last Sunday night.

Msizi, a third-year finance student at the Durban University of Technology (DUT), was leaving the tavern with friends when they ran into a police officer who had been standing outside.

CCTV footage obtained from the tavern shows the police officer grabbing Msizi by the clothes as he exits the tavern.

The footage also shows Msizi’s friends trying to prevent the officer from grabbing Msizi, who then walks away.

A group of police officers can then be seen then follow the friends as they leave.

One of the friends told the Herald that they heard gunshots, and thought the officer was firing warning shots to scare them.

“Then Msizi told us he had been hit, and fell to the ground.”

According to the friend, they asked the officer what Msizi had done to warrant being shot.

“The officer claimed it was a case of mistaken identity, as he reportedly thought Msizi ‘looked like someone else’.

“The officers told us to wait for an ambulance but we couldn’t because he was losing a lot of blood,” said the distraught friend.

It is believed that Msizi was taken to hospital in a private vehicle.

According to police spokesperson Captain Nqobile Gwala, officers from Harding responded to a complaint at the tavern at around 11pm.

“While one officer was still outside the tavern, a drunk man began throwing broken bottles at him. He then fired a shot, which struck a man in the arm.”

Captain Gwala said the man had been taken to hospital for medical attention.

Captain Gwala did not respond when asked if she had seen the CCTV footage showing the officer grabbing a man who had not been throwing bottles at him, and who was just walking exiting the establishment.

Numerous emails were sent to her asking for a follow-up comment, but no response was received at the time of going to print.

Msizi was due to travel back to university on Monday.

“Now he is stuck in hospital with bullet wounds to his chest,” said his upset brother.

The family said they feared for Msizi’s life, and that he would fall behind in his studies.

“It’s almost the end of the year. Universities are wrapping up their curricula, he should not be lying in that hospital bed.”

His father is said to not have taken the news well.

“My father is very hurt by the incident, and we want to know why no action has been taken against the constable who we feel was reckless with his firearm,” asked the brother.

“Why has he not been placed on suspension while the case is being investigated?”