'Our facilities are under siege, with thugs seemingly targeting them as they know our hospitals and clinics are gun-free zones,' a health department spokesperson said. 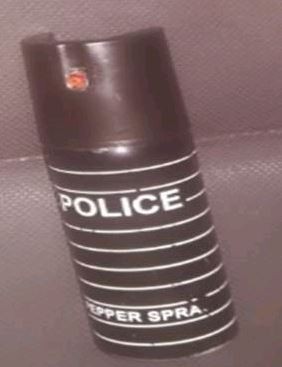 This pepper spray canister was found in the man's possession. Photo Supplied

A third attack at an Eastern Cape health facility has the Department of Health considering arming security guards with pepper spray and stun guns, a provincial department spokesperson said on Tuesday.

“This is one of the measures being explored, as health facilities are under siege from criminals who have been targeting hospitals and clinics recently,” said Sizwe Kupelo.

On Sunday, a man barged into All Saints Hospital in Ngcobo and killed a man who was already being treated for stab wounds, by stabbing him again.

“It is alleged that the deceased was at casualty section of the hospital, waiting to be stitched on his stab wounds, when an unknown man came and stabbed him to death,” Mdleleni said.

Kupelo said on Sunday that there were 10 guards deployed in various parts of the hospital, but that the man had forced his way through casualty security by wielding a knife.

“The doctor and nurses ran for their lives, while the security guards could not prevent the man from stabbing the patient to death,” Kupelo said.

In a separate incident, Kupelo said a vigilant Tyeks security guard managed to “sneak behind a man who had [pulled] a gun from a police officer at the Port Elizabeth Provincial Hospital”.

The man was suspected to be mentally ill.

In another incident on Sunday which has since come to light, a man stabbed his wife to death after she was discharged from the Taylor Bequest Hospital in Matatiele.

She was still on the hospital’s property when he attacked her. He went home and hanged himself afterwards. She had been admitted for domestic-violence related injuries.

“While the stabbing occurred outside our premises, it was yet another uncalled for attack on a patient who had just been discharged,” said Kupelo.

“Our facilities are under siege, with thugs seemingly targeting them as they know our hospitals and clinics are gun-free zones. Lawlessness cannot be tolerated.”

A meeting between unions, hospital management, the police and municipal officials has been held since these three incidents, and by Friday a range of new security measures would be introduced in stages, the department said.

WATCH: Suspect sets car full of ammo on fire before shooting himself in chest
7 hours ago
7 hours ago
PREMIUM!

WATCH: Suspect sets car full of ammo on fire before shooting himself in chest
7 hours ago
7 hours ago
PREMIUM!