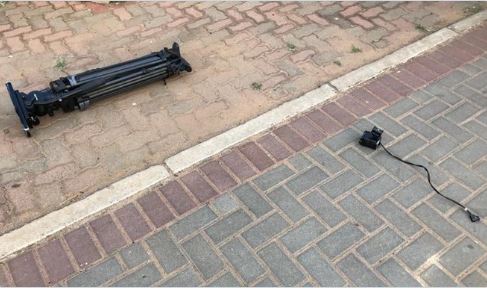 All that was left of their equipment after eNCA reporter Xoli Mngambi and a crew were robbed at gunpoint in Mamelodi East, 19 February 2020. Picture: Twitter / @TVwithThinus

eNCA reporter Xoli Mngambi and a crew on assignment in Mamelodi East were robbed of their equipment on Wednesday afternoon.

Breaking the news on Twitter, Mngambi said: “This is what’s left of our equipment [two news cameras and a tripod gone] after being robbed at gunpoint in #MamelodiEast while filming a feature this afternoon. A short video of the car that the three gun-wielding robbers were travelling in to follow … #Crime.

1/2[ROBBED at GUNPOINT]
This is what’s left of our equipment (2 news cameras and a tripod gone) after being robbed at gunpoint in #MamelodiEast while filming a feature this afternoon. A short video of the car that the 3 gun-wielding robbers were traveling in to follow… #Crime pic.twitter.com/00igwVpF9a— Xoli Mngambi (@XoliMngambi) February 19, 2020

He posted a picture of one of the tripods the robbers did not take.

In a short and hurried video clip filmed from a distance, a grey VW Polo without licence plates can be seen driving off.

2/2 [ROBBED at GUNPOINT] The 3 robbers fled in this grey VW Polo with no registration plates. A case has been opened at the Mamelodi East Police Station. #Crime #MamelodiEast pic.twitter.com/L90fGgLy5b

Gauteng police spokesperson Captain Kay Makhubela said at about 17.20pm in Phatudi Street at a house clinic in Mamelodi East, four employees of eNCA were interviewing a senior citizen at the clinic.

“Three men, one armed one with a firearm, held up the camera crew at gunpoint. They robbed them of two cameras, two sound bags and a tripod.”

“The victims drove to the police station to report the incident, and a task team has been established to gather information and to arrest the suspects.”

In a statement, eNCA said first take anchor Mngambi, producer Koketso Dlongolo, and camera operators Mbudzeni Bulasigobo and Gift Shabalala were at the Wellness Today Clinic when the robbery occurred.

“eNCA would like to state that although the TV crew’s equipment was stolen, the team remains safe and unharmed. The matter has since been reported to the police.

“The channel takes this matter seriously and will be assisting the staff members with trauma counselling.”

In a later message, Mngambi extended his thanks for the messages of support they had received.

This is the latest in a string of attacks on journalists. These include: