It was later found out that family members had dropped the couple off at the lodge, and that the couple had their cell phones on them the whole time. 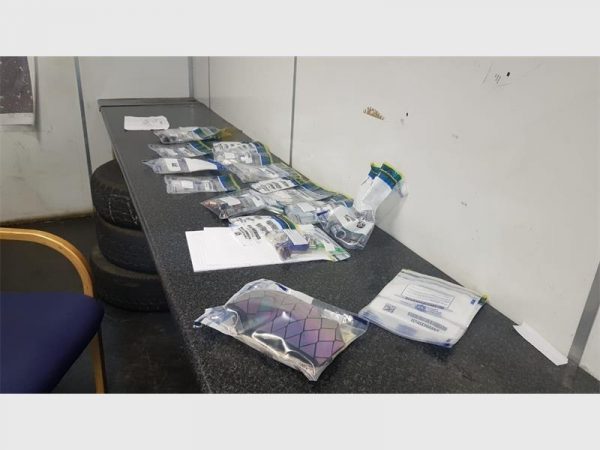 Some of the narcotics recovered by the police in Honeydew. Photo: Supplied

Honeydew police successfully recovered more than R150,000 worth of narcotics after responding to an alleged hostage/kidnapping situation occurring at a lodge in the Honeydew area.

At about 2pm on 30 January, the West Rand K9 Unit received a complaint about the situation and responded in full force to the scene.

“When officers arrived, lodge management informed us that the complainants were staying on the property and told them which room they were staying in,” said Honeydew police spokesperson Captain Balan Muthan.

The police found a man and a woman inside the room who claimed that they had been abducted from their house in the East Rand and were being held by unknown suspects against their will. They claimed they were initially held in Bedfordview before being transported to Honeydew.

“Officers then established from the lodge’s management that the individuals checked into their room on Friday evening, and not the morning as they initially told us. They even ate a buffet breakfast in the morning. This aroused our suspicions.”

This prompted the police to search the couple’s room where they discovered a large amount of packaged drugs including crystal meth, heroin, and several containers with the drug ‘liquid-g’ with an estimated street value of more than R150,000.

“The suspects were then detained for possession of the narcotics. Their claims to have been abducted and brought unwillingly to the lodge have also been refuted.”

It was also later found out that family members had dropped the couple off at the lodge, and that the couple had their cell phones on them the whole time.

The suspects’ motive behind their claim of kidnapping was unknown at the time of publishing
Police investigation into the matter continues and suspects are due to appear in the Randburg Magistrates’ Court soon.

This article was republished from Randburg Sun with permission