Police attempted to disperse 2 000 congregants an illegal church service, but were attacked by a group of aggressive male churchgoers. Several church congregants were arrested this weekend after attacking Johannesburg metro police (JMPD) officials when they went to disperse a mass church service in contravention of Covid-19 safety regulations on Sunday, 28 March.

JMPD spokesperson Wayne Minnaar said seven officers attended to a complaint about noise at a church in Midway, Soweto.

“On their arrival about 1pm, the officers were surrounded by a group of aggressive male churchgoers who banged on the JMPD patrol vehicles, he said.

“Officers used pepper gas to disperse the group and called for backup. Rubber bullets were then used to disperse the aggressive churchgoers who damaged patrol vehicles and injured two officers,” Minnaar said.

One officer was taken to Milpark Hospital while two churchgoers were also injured, with one later taken to Chris Hani Baragwanath Hospital.

“Several church members were arrested, including the pastor of the church. They were charged at Moroka police station with charges of public violence, assault, malicious damage to property and contravention of the Disaster Management Act as more than 2,000 people were attending the church service,” Minnar said.

Meanwhile SAPS has reminded the community at large there is no waiting period to report a person who has gone missing.

Report a missing person at your nearest police station immediately.

Here’s how you can report a missing person.

Police have urged the public to be vigilant and work collectively to keep families together and safe.

Contact details for the national and regional offices of the Bureau of Missing Persons: 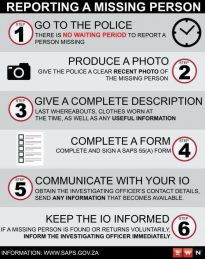 Here’s how to report a missing person. Photo: Supplied.

Buyaphi University: Taking free education to the streets of Gauteng
2 weeks ago
2 weeks ago
PREMIUM!

Buyaphi University: Taking free education to the streets of Gauteng
2 weeks ago
2 weeks ago
PREMIUM!