Members of the Flying Squad responded when the Fortuner's tracker was activated. 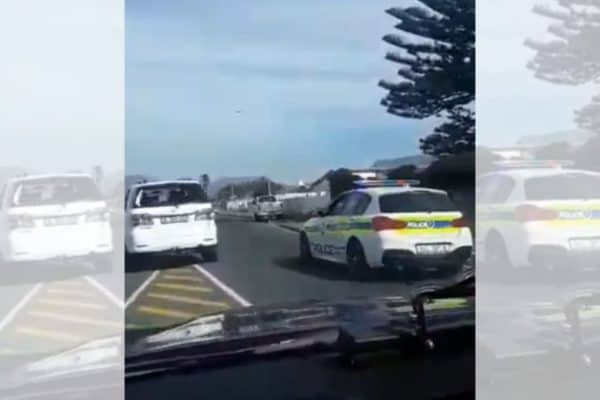 Three men were arrested on Thursday following a botched hijacking and a high-speed chase down Zeekoe Road in Grassy Park, Cape Town.

Dashcam footage of the chase, as well as an eyewitness account, has now been shared on social media and show reaction personnel chasing the hijacked vehicle.

Gunshots can be throughout the duration of the short clip as police vehicles chase after the hijacked Toyota Fortuner at breakneck speeds in an attempt to block intersections.

The vehicle was hijacked early Tuesday morning, and members of the Flying Squad responded when the Fortuner’s tracker was activated on Thursday.

Warrant Officer Joseph Swartbooi said a woman was robbed at gunpoint by the three men, who also forced her out of the Fortuner.

“The driver ignored calls to stop and bumped into vehicles on the way as a result of the high-speed chase,” WO Swartbooi said.

He said members of the Flying Squad “fired numerous gunshots at the hijacked vehicle” before it was brought to a halt.

The vehicle was eventually brought to a standstill in Ottery, where authorities apprehended the three hijackers, aged 17, 36 and 37.

They were also found to be in possession of an imitation firearm.

The three suspects will appear before the Wynberg Magistrate’s Court on a charge of hijacking in due course.

In an unrelated case, the quick response from Gqeberha Flying Squad thwarted an alleged illegal abalone deal. A Chinese national was arrested while on his way to secure the deal.

Colonel Priscilla Naidu said the suspect’s vehicle was spotted in Marine Drive in Summerstrand, but the suspect sped off when officials approached.

ALSO READ: Police seize abalone in the Western Cape worth about R2.4 million