A woman was stabbed in the arm and her husband was hit on the head with a hammer during the house robbery. 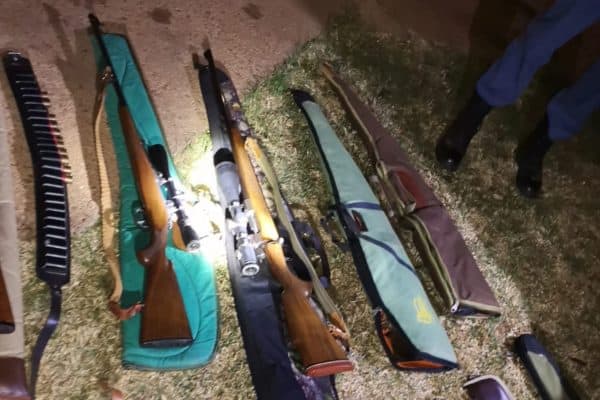 Westonaria police arrested two suspects and recovered 19 stolen rifles that were taken during a house robbery on Thursday. Picture: Supplied/SAPS

Police arrested two suspects and recovered 19 rifles that were stolen during a house robbery on Thursday.

An elderly couple was ambushed by four suspects at their home in Westonaria, west of Johannesburg.

“During the robbery, the suspects stabbed the 66-year-old wife in the arm and tied her up while her 71-year-old husband was outside. When the husband returned to the house he was hit on the head with a hammer before being tied up as well,” said Colonel Noxolo Kweza.

Kweza said the suspects took 19 hunting rifles, knives and other household goods before fleeing in the couple’s Toyota Hilux.

The couple was rescued when their children arrived at the house later that evening.

“They immediately untied them and went to the neighbours to contact the police. Police reacted swiftly and while on their way to take statements from the injured couple, they spotted the couple’s bakkie driving past them on the road,” said Kweza.

Police pursued the stolen vehicle but the suspects stopped on the side of the road and fled on foot.

“Two suspects were arrested while two others escaped. Police are on the look-out for the suspects,” said Kweza.

“Perseverance and diligence by detectives to bring justice to the families of victims will restore the communities’ faith in the South African Police Service,” said Mawela.

Meanwhile, in KwaZulu-Natal on Thursday, police were involved in a high-speed chase with four armed men in the Ugu district in the south coast.

The suspects’ vehicle was pulled over near the Umtentweni Toll Plaza and the men were found to be in possession of two firearms and 32 rounds of ammunition.

“All four suspects, aged between 25 and 43 years, were arrested for the unlawful possession of firearms and ammunition,” said Colonel Thembeka Mbele.

Mbele also said one of the suspects was wanted for a double murder case which was committed in the Eastern Cape in June.