'We do not have proof of it,' says Gauteng police spokesperson Brigadier Brenda Muridili. The police arrived at the scene and were told by a witness that a black VW Polo was shot at by occupants of a silver grey Mercedes-Benz.

The driver of the Polo was declared dead at the scene, while his girlfriend was rushed to hospital with gunshot wounds.

A task team, which has been investigating gang activities in Mamelodi, linked to the deceased – identified as 35-year-old Phillip Given Mnguni – to several cases linked to the Boko Haram gang.

No arrests have made at this stage and the police have registered a case of murder and attempted murder.

Last week, seven men whom were allegedly killed by “John Wick” are believed to be members of the Boko Haram gang in Soshanguve, north of Tshwane.

John Wick is a Hollywood movie starring Keanu Reeves about a man who goes on a killing spree after Russian gangsters kill his dog.

“With regards to John Wick, it is just something that we believe does not exist because we do not have proof of it. Like I said, evidence that we have at our disposal does not suggest that there is a lone gunman going around [killing people],” she said.

Muridili said the possible motive behind the killings is that there may be a rivalry between Boko Haram and another gang.

“Remember that evidence has to support what we say and what we have to say right now is that we sticking to that narrative that we believe it is infighting between the two gangs. They are trying to eliminate one another and then gain authority of some sort.

“[The person] that was killed [on Tuesday] is alleged to have been the leader of Boko Haram and we know that he is linked to [the group]. At this stage we cannot say for sure he was the leader, but he was the most wanted,” she added. 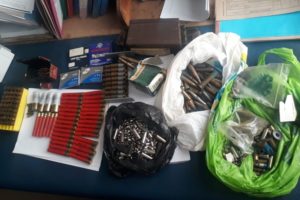