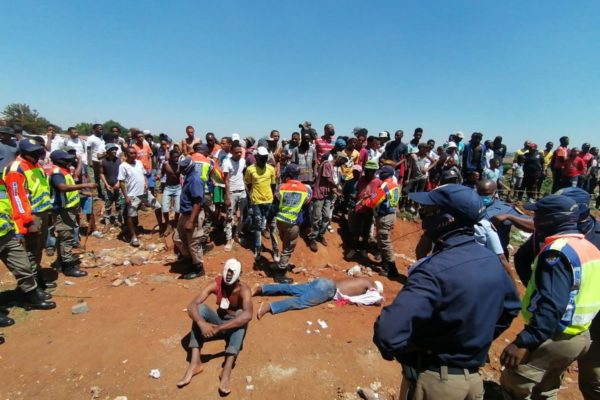 JMPD officers try to keep community members away from two suspects that reportedly robbed a supermarket in Eldorado Park on Thursday. Photo: Supplied

There were chaotic scenes in Eldorado Park on Thursday as community members took justice into their own hands after a HyperSave supermarket was robbed.

According to Dwain Ponsonby, the newly-elected councillor in Ward 17, six armed robbers entered the store and stole cash. They reportedly fled when one of HyperSave’s employees fired a shot at one of the suspects.

While four suspects escaped in a car, the other two fled on foot and were chased by community members. A woman sustained a gunshot wound to her leg during the chase. She was later taken to hospital.

The community members then caught up with the suspects and started beating them. More shots were reportedly fired before police arrived on the scene.

“It was quite a volatile scene as the community was angry because of what the guys did. As they pursued them, the robbers shot at them,” said Ponsoby.

“Police then opened fire in front of me,” added Ponsoby.

According to JMPD Spokesperson Wayne Minnaar, the community became violent when officers separated them from the suspects. He said they then prevented an ambulance from attending to the “brutally” injured suspects.

“A SAPS vehicle reversed and loaded the suspects to get them to a hospital. This angered the violent crowd who then pelted the officers on scene and police vehicles with rocks and stones,” said Minnaar.

Minnaar said JMPD officers fired warning shots into the air to disperse the violent crowd and rescue other police officers.

“Two JMPD officers were injured and had to be taken to Milpark Hospital. The incident will be investigated,” he said.

Ponsoby said one firearm was seized by police, while another is being searched for.

A case of attempted murder and robbery has been opened against the two arrested suspects. Police are still looking for the other four that escaped.

“We will closely follow this case and make sure justice prevails,” said Ponsoby.

The JMPD has been asked for comment and this will be added to the story when provided.