Randall Carolissen explained what had happened to the almost R1bn the department had announced in March last year to settle the debt of qualifying students. 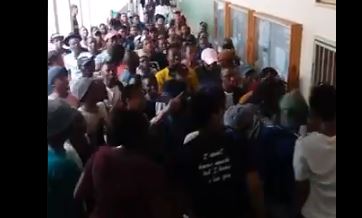 Amid protests at universities across the country over historic debt, the National Student Financial Aid Scheme (Nsfas) says it has paid out money to institutions and will again open applications soon.

During a visit by Higher Education Minister Blade Nzimande to Nsfas’ offices in Cape Town, the scheme’s administrator, Randall Carolissen, explained what had happened to the almost R1bn the department had announced in March last year to settle the debt of qualifying students.

He said the scheme had received applications for R1.7bn which they worked through and stripped out. “Only R450m were paid to institutions.”

It then launched a second round of applications with a refined criteria and paid out more applicants.

Carolissen said the money had to last until 2022, adding one of the key challenges was the phenomenon of walk-ins which placed an enormous strain on the administration.

“We will be opening the 2019 applications on April 1 … and will give an update once all claims are in.”

In response to a memorandum of demands from the South African Union of Students last month, which was submitted on behalf of SRCs from all 26 universities in the country, Nzimande said Nsfas-qualifying students, who carried debt from 2019, would be allowed to register at universities, provided they signed an acknowledgement of debt form.

However, there was no possibility the debts of students, who were not Nsfas-qualifying, could be eradicated by the government, he announced.

On Tuesday, Nzimande said he was pleased with the progress made by the Nsfas.

“Compared to the last time I was here, there really is a very big improvement in the operation of the Nsfas,” he said.

“I must reiterate that one of the biggest achievements is for the first time, in the beginning of 2020, applications received between September and November last year have been dealt with … that has made a big difference.

“This has contributed a lot towards a much more smoother registration process despite a few institutions where we had challenges.”

Nzimande said he hoped to launch a ministerial task team soon to investigate the functionality of the Nsfas as a whole.

The task team would review policies and procedures as well as assess what the needs were.

“We want to do it now while the administrator is still in place so he can make his own input … so we can improve the system as much as possible,” Nzimande said.

Carolissen’s second term comes to an end on August 21.