Pupils returned to the refurbished school with 15 additional classrooms, two laboratories, a library, sports fields and a hall on Monday. 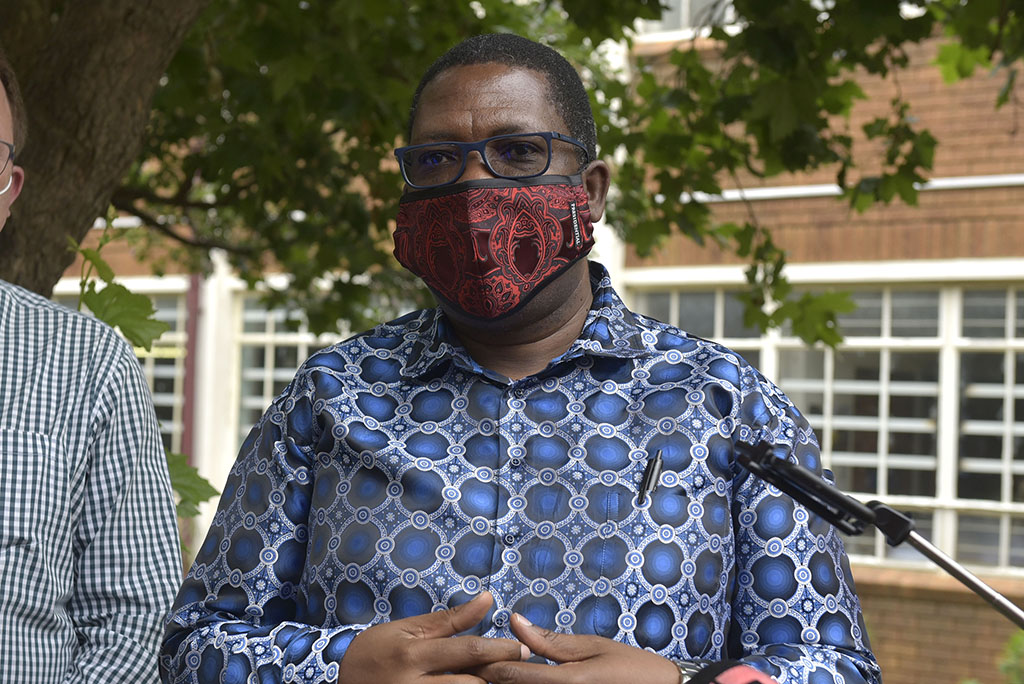 Gauteng MEC of Education, Panyaza Lesufi speaks to media at Elspark Hoerskool in Boksburg, 17 November. He was visiting the school after a video showing a fight at the school in which two learners were stabbed was posted on the internet. Picture: Neil McCartney

The Gauteng Department of Education says it is on a journey of working towards rectifying the mistakes of apartheid and ensuring townships have world-class schools.

Gauteng Education MEC Panyaza Lesufi said the department has set itself a target of doing away with mobile classrooms and schools built with asbestos in the next five years.

Marking the first day of school in the 2021 academic year on Monday, Lesufi, along with Gauteng Premier David Makhura, Ekurhuleni Mayor Mzwandile Masina and members of Parliament unveiled the Abram Hlophe Primary School to the community of Katlehong.

Children, all masked up, trickled in as early as 07:00 for their first day.

WATCH: Back to school for learners

Speaking during the handover ceremony attended by officials and the school governing body, Lesufi said the unveiling of the multimillion-rand school was part of the department’s plan of “changing the face of townships”.

“We have made a commitment to remove asbestos schools in Gauteng. There are 17, if I am not mistaken. That’s one crucial task and that commitment is in court. We were taken to court by some NGOs.

“And slowly… we have put ourselves a commitment with the HOD and team that here in Gauteng in the next five years, we must not even have a single mobile classroom in all our townships,” Lesufi said.

About 2.3 million pupils were expected in schools across the province, Lesufi said. He added schools were ready with teachers and learning material for pupils.

Lesufi said 34 teachers in the province had succumbed to Covid-19.

The MEC said nearly 120,000 Grade 1s across the province were expected to start their primary school education.

Previously, the school taught its pupils in about 20 classrooms with no administration block, library and hall.

But on Monday, pupils returned to a refurbished school with 15 additional classrooms, two laboratories, a library, sports fields and a hall.

The hall, which is fully equipped with a kitchen, will also serve as a dining area for pupils benefitting from the National School Nutrition Programme.

The school also has a Grade R block with its own entrance and playing area.

Motara said the contractors and the material used for the project were locally sourced from around the municipality.

“That’s the story of what it took and what it takes to put up a facility such as this and we share that because we want the community to be able to take ownership [and] to value the investment, but also to look after [it].

“R77 million is not a small amount of money and we would hate to see this facility being destroyed or even not well looked after and well maintained.”

Pupils have been urged to also play a role in taking care of the facility.

Delivering his keynote address, Makhura said townships being afforded such schools was not a favour, but a representation of development.

Makhura said: “We can’t allow criminals to feed on the future of our children. So this school must be guarded by this community because we took a decision to build a school here, while there are others in the queue. There are other communities waiting for a school.”

He thanked teachers for their persistence and for risking their lives teaching during the Covid-19 pandemic.

“We reopen schools today [and] we know there will still be a lot of anxiety, but we have to do anything (sic), [and] fight the pandemic with all other means, sanitising, wearing masks, social distancing and washing of hands…”

Makhura assured teachers that although they were not part of phase one of the vaccination rollout, they would be prioritised during phase two.