The students' attempt to avoid their exam was foiled, when the school made them write the assessment outside. 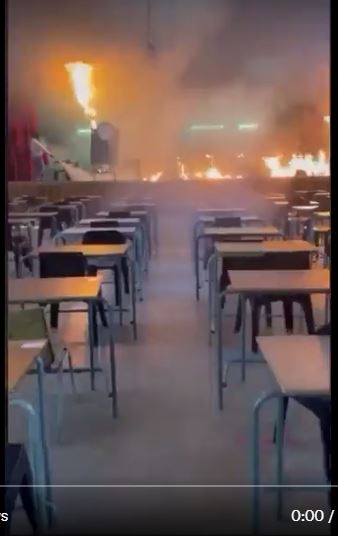 Pupils at Glen Vista High School in Johannesburg South had to write their exams outside, after a group of their fellow learners allegedly set part of the school hall ablaze, apparently to avoid assessments.

Fortunately, the fire was extinguished before causing major damage, but the hall’s curtains, projector screen, electrical wiring and PA system were damaged by the fire.

Yesterday they burnt the school hall because they didn’t want to write an exam. Today, they wrote the exams outside. So sad ???? #GlenvistaHigh ⁦@EducationGP1⁩ ⁦@Steve_Mabona⁩ pic.twitter.com/rUEr0td5oW— Panyaza Lesufi (@Lesufi) August 17, 2021

“We are devastated to discover that learners could go as far as committing an act of arson, destroying school infrastructure in the process, just to escape an important assessment. As such, we will not fix the damages caused by this fire,” said Gauteng Education MEC Panyaza Lesufi.

Matric pupil Nwabisa Nkabinde wasn’t happy about the school’s decision to make them take their exams outside. “It’s exhausting writing in the heat, we get tired easily. It’s disappointing because it makes Glen Vista look bad,” said Nkabinde.

Action SA’s Sarah Wissler says the school has a history of behavioural problems. In 2019 Johannesburg Metro Police raided the school. Dagga and hookah pipes were found in pupils bags.

A resident living near the school, who spoke on the condition of anonymity said the discipline problems have escalated over the years.

“Some of them smoke marijuana freely on our pavements while waiting for their transport.”

He said the majority of people living near the school’s neighbours are elderly. “Just before lockdown, a pupil was badly beaten outside, residents had to break them up and call the police,” he said.