Malema says police must go after ‘criminals in the ANC’

The EFF leader believes members of the governing party should either be in old-age homes or prison. 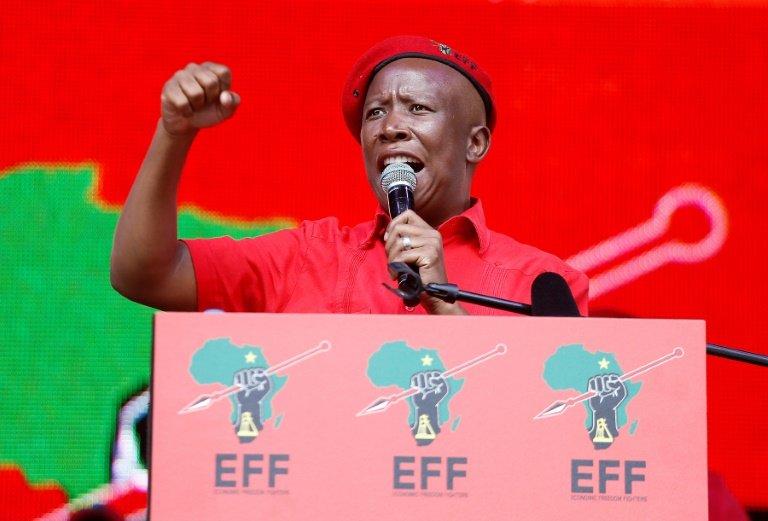 Julius Malema is known for his controversial statements. AFP/Phill Magakoe

“Police officers, it is like you do not know where the thugs are. Come to me, I have a list. They are in Luthuli House [ANC headquarters] and in the Union Buildings [seat of government].

“You leave the biggest thug to go around addressing in stadiums. He doesn’t belong in the Union Buildings, he belongs in Sun City prison,” Malema told thousands of supporters at the EFF’s final May 8 Tshela Thupa election rally at the Orlando Stadium in Soweto, Johannesburg.

“Police officers, you must not be shooting protesters. Demanding justice and fighting are two different things. When we are marching and barricading the roads [it] is because the criminals in the office are not giving us what we demand. Do not shoot at us.”

Malema said the governing party had failed to alleviate poverty because it was led by “old people who should either be at old-age homes or in prison” for their alleged crimes.

“25 years and these people have failed to restore the dignity of the African child. Why do we still have ghettos? This place was designed as a prison, that is why you have one entrance. If you were to leave the township at night to go into town you would be arrested,” he said.

“Ramaphosa o fedile [is finished]. They are all old, they must retire. Leave them alone and stop sending them. We no longer want mobile toilets, we want flushing toilets at Winnie Mandela squatter camp. The people of Alex, the children are being eaten by rats, ANC has forgotten about the poor of the poorest.”

In an emotionally charged and strong-worded speech, Malema made a raft of promises to the electorate, including doubling the amount for social grants and free housing and education. Under an EFF government, black people, and women in particular, would own more than 50 % of the land because they were the majority in South Africa.

“We want to double the money for the elderly and that of children that receive social grants. We want a proper crèche where there is a settlement. We want a clinic that operates 24 hours. We want free education,” Malema said.

“We want you to be able to receive a bond from FNB after you are done voting, whether you are black or not, they should not charge you more because of your skin colour. Political freedom without economic freedom is meaningless. South Africa, on the 8th of May, let us vote for the hope of the hopeless.”