No South Africans, no business, says Mashaba in election campaign

Mashaba said it was vital that each person vote in the elections on 1 November, 'to expel the ANC from office'. 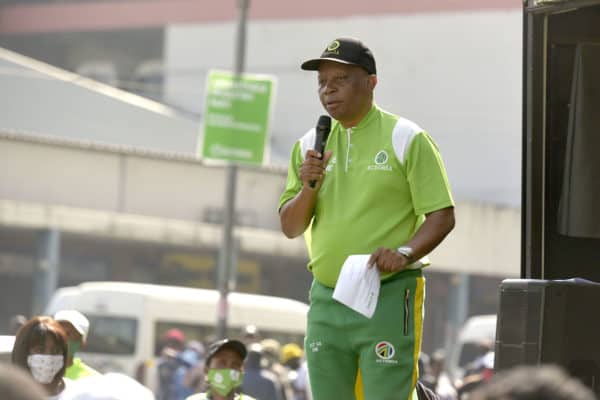 From abolishing trade unions to expanding metro police units, ActionSA leader Herman Mashaba declared that his party is “ready to govern” during a local government election campaign outside the Bree taxi rank in the Johannesburg CBD.

The location of his speech itself was significant, with Mashaba striving for South Africans to be able to come into the city “without having to worry they’re going to be mugged” – a possibility he said he could make happen.

Mashaba said it was vital that each person vote in the elections on 1 November, “to expel the ANC from office”.

“It is a guarantee that we can offer real services to people who have grown weary of broken promises and political lies.

“In a party that is just a year old, we have former mayors, MMCs [mayoral committee members], chiefs of staff, a chief of metro police, a CEO of Salga [South African Local Government Association], chairpersons of [parliamentary [portfolio committees], and the list goes on and on.”

Aside from a plethora of promises, the contentious issue of foreign national eked into his street declarations.

No ‘united states of Africa’

Mashaba spoke strongly against the soaring unemployment rates in South Africa, in part fuelled by “ANC cadres enrich[ing] themselves”.

Under ActionSA, Mashaba said he envisioned an economy where no one could operate a business if South Africans were not employed.

“We are not going to allow any country in the world to dictate to us, outsource their own problems to us, when 12 million of our own people are unemployed.

“Those who want the united states of Africa, let them go somewhere else. We will talk to them in about 20 years or so; the day when South Africa has got under 5% unemployment.

He said ActionSA would have a zero-tolerance approach when it came to undocumented foreigners.

“We are going to ensure that we put pressure on Home Affairs. It is their constitutional responsibility to protect our borders.”

He said anyone wishing to own a business that is not a South African resident must have the relevant documentation, and be registered with the South African Revenue Service (Sars).

Mashaba said ActionSA was, among other values, “a party that believes in economic prosperity”.

As such, he said trade unions such as Cosatu would not be a permanent feature in the way the party runs the economy.

“We are not going to be the party with unions dictating to us in terms of our economic policies.”

He slammed Cosatu for “destroy[ing] jobs over the last 27 years” by “closing one business after the other”.

Mashaba vowed the union would “never dictate our economic policy”.