Ramaphosa: Communities must be served consistently – not just before elections

In light of the recent voter registration weekend, Ramaphosa encouraged people to hold councillors, and each other, accountable. 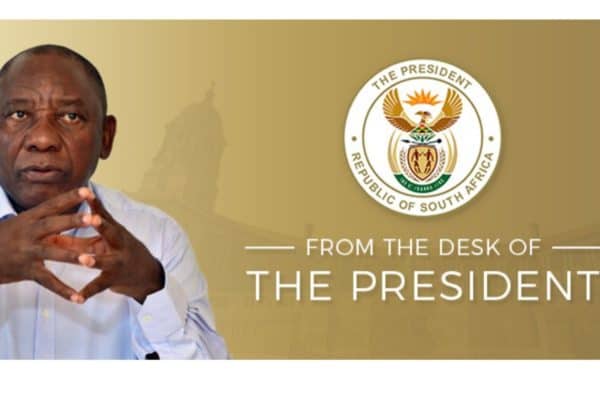 In his weekly letter to the nation, President Cyril Ramaphosa said community members not being given basic service delivery also had to understand that certain services, such as water and electricity, ran out after a certain amount was used.

Speaking to frustrated people in Soweto about ongoing power cuts, Ramaphosa said it was integral that everyone be informed of their options in a manner or language they understand, and not be left in the dark by public servants.

In light of the voter registration weekend that passed, he encouraged people to hold councillors accountable, but implored citizens to hold each other to account as well.

This means not creating illegal electricity connections, engaging in violent protests or damaging infrastructure, he said.

“Communities must use their vote to deal with councillors with poor track records of meeting their promises.”

We have just finished the final voter registration weekend ahead of the local government elections on 1 November.

As I met with residents in parts of Gauteng and Mpumalanga over the weekend, what struck me most was the importance of local government being accessible, visible and above all, reachable. This is particularly important when service delivery challenges, disruptions or failures occur.

Citizens often complain that in the lead up to elections, ward councillors, candidates and officials are energetic, interacting with communities and listening to their concerns. However, once elections have passed, they either disappear or it becomes difficult to reach them.

A number of people in the communities I visited told me that municipalities are slow to attend to their problems, don’t keep communities updated about disruptions, and when services are cut off for non-payment, fail to inform them of their options in a manner or language they understand.

A case in point is that of electricity. This has become the foremost pressing issue for communities around the country.

Speaking to people in areas in Soweto, it was evident that anger and frustration over having their electricity cut-off could have been avoided had thoroughgoing interactions with communities been embarked upon around issues such as illegal electricity connections, the vandalisation of electricity substations and the benefits of a prepaid electricity system. Many people also felt that they were being unfairly penalised because of the non-payment of others.

Over the last 20 years, we have provided a set of free basic services to millions of poor and indigent families. But for services to be sustainable, it is necessary that residents pay for what they use above the free basic amount. What I found is that many communities were not aware of exactly how much free water and electricity is provided to poor households.

Following engagement with a number of community leaders on how the challenges that people face with regard to electricity can be resolved and how people can also work with municipalities and Eskom to resolve the problem, I found a profound level of understanding and willingness to pay for services that are utilised.

When people are deprived of the basic services without proper explanation of why this has happened or how it is being fixed, it erodes public confidence in local government. Sometimes people think that the only way to get the attention of those tasked with the provision of services is through violent protest.

The latest data from the Public Violence and Protest Monitor produced by the Institute for Security Studies shows that of the 585 water and sanitation service delivery protests recorded between January 2013 and April 2021, 65% turned violent. The study shows that good and regular communication between municipalities and communities around planned disruptions and when they will be resolved prevented violence in a number of cases.

Our Constitution says that in the provision of services to communities in a sustainable manner, local government must be democratic and accountable.

This means that elected public representatives need to be out in communities, listening to their concerns and resolving their problems. A common refrain from communities, and something I heard again over the weekend, is that engagement with ward councillors starts off well, but diminishes steadily over time.

Accountable local government means maintaining a sustained public presence and an open door policy, not just when election time comes around. Services must be delivered and allocated budgets must be spent. When this does not happen as planned, elected officials must clearly explain why and show how and when problems will be fixed.

Democratic accountability extends to the conduct of citizens as well. During the weekend’s engagement with communities, I called on people not to undermine service delivery themselves by making illegal connections or damaging infrastructure.

Earlier this year, during Freedom Day celebrations, I said that communities must use their vote to deal with councillors with poor track records of meeting their promises.

It is at local government level where our commitment to advancing human rights is measured the most.

Water, electricity, sanitation, housing, education and health care are the things people need most to have a decent quality of life. Where local government fails to meet these needs, the impact is immediate and profound.

But when local government is efficient and well-run, it provides the foundation people need to improve their living standards and find opportunities.

Just as citizens should use their vote to improve their communities, I also wish to encourage those standing for election to listen to what people are saying about engaging with them more effectively and more often.

We share the common goal of a better life for all.

Regardless of which political party we support, belong to or are campaigning for, let us together work to rebuild trust and improve communication.

Let us agree that this election will not merely be about securing the most votes, but will be fundamentally about the people of South Africa and ensuring that their best interests are placed above all else.