DA backs down on controversial election posters in Phoenix 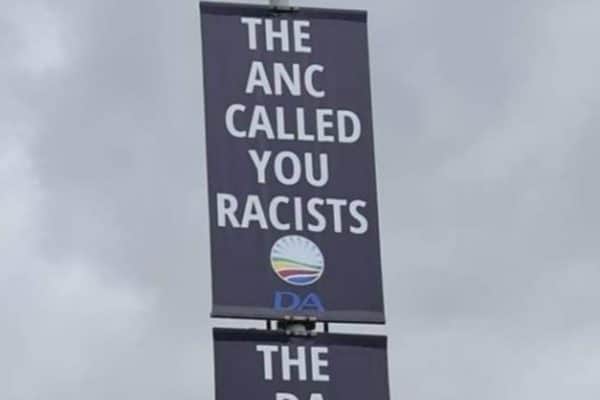 The DA election posters in Phoenix that read 'The ANC called you racists' and 'The DA calls you heroes'. Picture: Twitter/@SihleSamketi

The Democratic Alliance (DA) says it is in the process of taking down its controversial local government election posters put up in Phoenix recently, after the party was accused of stirring racial tension in the area.

Phoenix has been a hotbed of racial tension since the looting and riots in July. More than 30 people died and over 50 were injured in the area during violent unrest and looting that occurred in KwaZulu-Natal and Gauteng, ostensibly triggered by the arrest of former president Jacob Zuma.

“In my sincere effort to honour the bravery and heroism of law-abiding citizens who were left to fend for themselves during the July riots and insurrections, the posters have regretfully caused hurt to some people. I am deeply sorry and apologise for this,” Macpherson said.

Macpherson added that the posters were unsanctioned by the DA leader John Steenhuisen, party structures and campaign leadership.

ALSO READ: John Steenhuisen will not apologise for DA election posters in Phoenix

On Tuesday, the ANC in KwaZulu-Natal said the posters were “shameful and fascist in nature”. It even accused the DA of promoting and supporting the “heinous murders committed by a few racists in Phoenix during the violent protests in July”.

ANC deputy secretary-general Jessie Duarte said although it was a “good thing” that the DA was taking the posters down, her party will go ahead with its Human Rights Commission complaint.

On Wednesday, Steenhuisen refused to apologise for the election posters. He was adamant that his party was merely defending South Africans who stood up for the rule of law.

Cele responded by labelling Steenhuisen a “brainless political thug” with “no conscience”.

Referring to the people that were killed in Phoenix, Cele said Steenhuisen had “put extra salt of racism on this matter”.

“I have always had doubts about Steenhuisen. I don’t have a doubt now, I am flabbergasted. To me he is a thug, he is a political criminal that the nation must deal with him as such, he has no conscious [sic], he has no brains whatsoever.