Mbalula has 100 days to modernise the railway system

Outdated train platforms need to be upgraded, migrated and then commissioned or integrated into the new nerve centre in Thembisa. 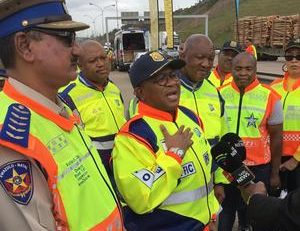 As part of the “100 day commitment” to turn around the state of South African railways, Transport Minister Fikile Mbalula, with Prasa, launched the War Room.

The War Room is a tool to track the progress of the entire plan to modernise and improve South Africa’s railways.

At the core of this turnaround strategy is a process to modernise the infrastructure and technology that is long outdated. As part of the nation-wide plan, Prasa and Mbalula took journalists on a tour of the old and new in Gauteng’s railways.

“As a build-up to this launch, this morning we visited the signal cabin in Germiston, which embodies the challenges Prasa faces in controlling train movement using outdated technology, prone to human error due to the chronic cable theft that affects the daily movement of trains,” Mbalula said.

He continued: “We later visited the Gauteng Nerve Centre in Thembisa, a state of the art facility that will enable PRASA to monitor the entirety of the Gauteng network from one location and enable rapid response when challenges in the network arise.”

The Nerve Centre is also a control centre of all railway lines in Gauteng. A single place where information from all other platforms are gathered and sorted through.

Outdated train platforms need to be upgraded, migrated and then commissioned or integrated into the new nerve centre in Thembisa. So far, 48 of the 98 platforms in Gauteng have been migrated.

By June next year, Prasa plan to have 80% of all Gauteng platforms connected to the nerve centre.

While both Prasa and the department of transport have been in the process of modernisation for three years now, the 100-day commitment is an incentive to pick up the speed.

The War Room, housed in Prasa’s offices, will be the “game changer”, Mbalula said.

”The War Room is a physical space that will enable those deployed to the War Room to make rapid decisions based on the information they gather from the operations on the ground, on an hour by hour basis.”

The War Room will track service recovery, safety management, the modernisation programme as well as organisational and operation progress within the 100 days.

”On a daily basis, the team will start the day with an assessment of the previous day’s performance and identify issues that hamper performance and make decisions on how to resolve these,” Mbalula said.

He continued: ”The relevant officials with delegated authority will action these discussions and report to the War Room through the Daily Status Meetings.

”Performance will be managed and monitored daily to ensure sustained improvement. ”

Mbalula has until December 31, 2019, to show an improvement and added that there is an urgency to address the crisis of South Africa’s railways.

”The urgency of addressing Prasa’s turnaround cannot be overemphasised and tangible results that people can see must be realised in the shortest possible time.”