A letter has exposed how seven municipal officials spent close to R180 000 from the trust fund to attend the 2019 Durban July under the guise of a 'local economic development' trip. 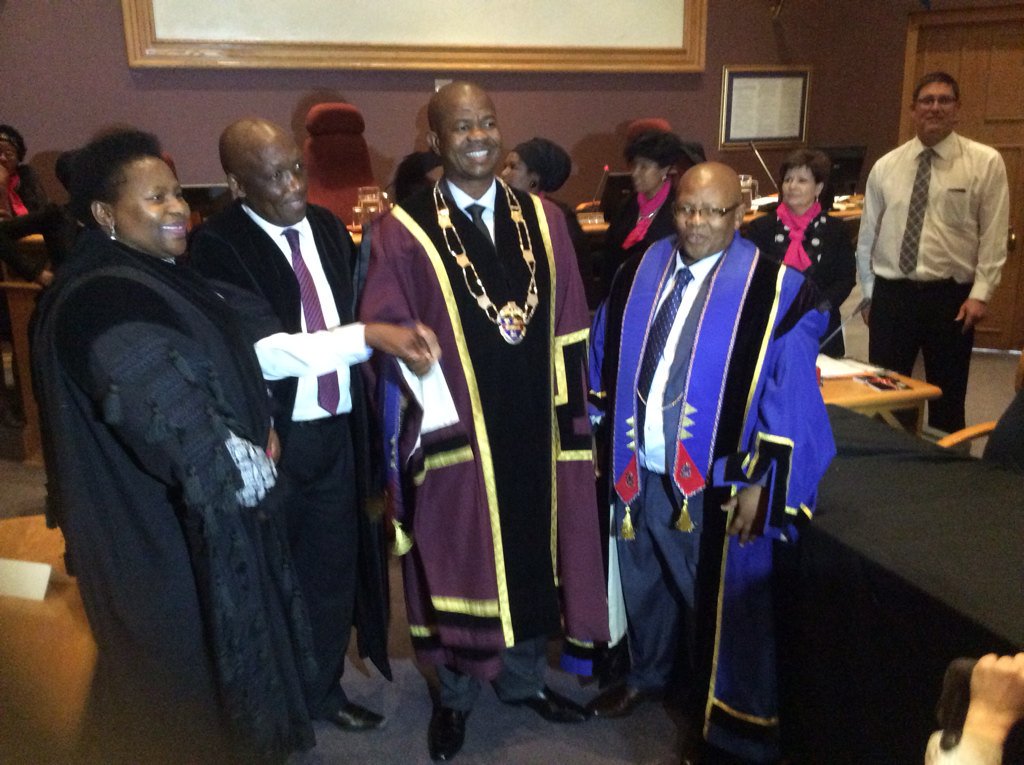 Mayor Kgotso Khumalo being sworn in on August 17, 2016. Image: Twitter/@NW_LGHS

The fund was intended to empower small and medium community businesses.

In a letter to council – dated November 19 – Kegakilwe notes that in his capacity as MEC, he wrote a letter to attorneys Willem Coetzee Inc seeking a report into the activities of the trust account which houses money received from a mining rights holder.

The letter follows a News24 report exposing how seven officials spent close to R180 000 from the trust fund to attend the 2019 Durban July under the guise of a “local economic development” trip.

This occurred in the midst of the municipality – which houses Ventersdorp and Potchefstroom – being placed under administration following a series of revelations detailing alleged fraud, corruption and maladministration over a number of years, News24 reported.

Kegakilwe’s department has been pushing to place the municipality under administration. However, the council has been fighting this.

In addition, the letter expresses concerns over the mayor allegedly instructing the trust to make payments to two NGOs.

Records, however, reveal the R100 000 intended for the NGOs was transferred to a company called Sez Orifile which sources, with insight into the investigation, claim is managed by at least one person with ties to the mayor. The mayor’s office has denied this.

“The attorneys further confirm that the executive mayor indicated that the money will be treated as a loan and shall be refunded to the council. The department does not know if it was refunded,” the letter read.

By instructing that a loan be paid from the trust, Kegakilwe is of that the view that Khumalo, in his capacity as executive mayor, contravened the following:

Section 12 of the MFMA that allows the municipality to open a separate bank account for relief, charitable, trust or other funds. However, section 12(4)(a) only empowers the accounting officer or any other person with the written authority of the accounting officer in accordance to manage the account. There is no provision in any law or regulation that empowers the executive mayor to instruct attorneys to release funds from the trust account.

Considering the above regulation, the department was of the view the council should appoint a committee to investigate the breach of the code of conduct by the executive mayor.

As a result, Kegakilwe has instructed the municipality to convene a special sitting to consider the serious allegations against the mayor of the troubled municipality and further resolve how to deal with his conduct.

“The accounting officer must investigate and take appropriate actions against the officials mentioned in the report by the attorneys and report to my office within 14 days from receipt of this letter on the progress made,” he demanded.

On Sunday, a high-level source told News24 an ordinary council meeting was sitting on Tuesday but that no case relating to the mayor’s conduct featured on the agenda.

When News24 previously approached the municipality for comment, spokesperson Victor Boqo refused to comment, saying the case was “sub-judice” although it appeared it had not yet appeared before any judge or court of law.

“The matter of your enquiry is subjected to an investigation by the Hawks and therefore is sub-judice. The report must still be served before council. It is against this background that I cannot comment further,” he told News24 on November 14.

News24 reached out to the municipality for comment on Monday. It denied having any knowledge of the letter and refuted claims the mayor had taken out a loan.

“The executive mayor has not taken any loan from the municipal trust fund and he has no relationship with any company you are referring to. We have not seen the letter you are mentioning and to date no letter has been written to the executive mayor,” Boqo told News24 on Monday.

However, department spokesperson Dineo Thapelo said the municipality had yet to respond to it regarding investigating the conduct of the mayor in line with the Municipal Systems Act.

“Should the council not sit to resolve the matter, the MEC can in terms of Section 106 of the Municipal System Act, institute a forensic investigation against the mayor,” Thapelo added.

The Hawks previously confirmed to News24 an investigation was currently being conducted into the troubled municipality, however, they could not divulge details about it.