Noko was notified three days before she resigned that Ramaphosa had decided that her conduct should be formally investigated. 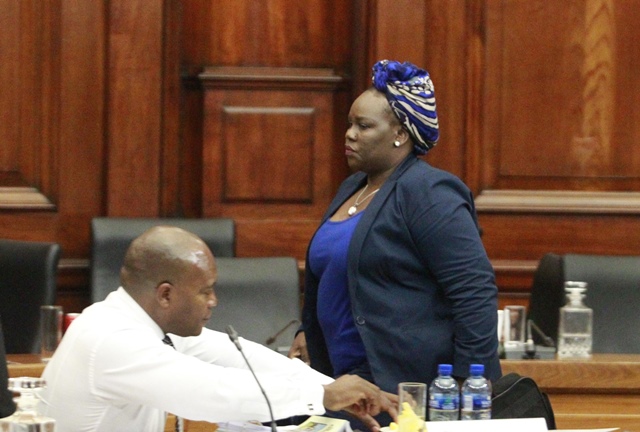 President Cyril Ramaphosa has accepted the resignation of North-West prosecutions head Moipone Noko – who asked to step down after being informed she would face an inquiry into her fitness to hold office, as well as possible suspension.

The presidency says Ramaphosa accepted Noko’s resignation after National Director of Public Prosecutions Shamila Batohi recommended that he do so.

Noko was the KwaZulu-Natal Director of Public Prosecutions when she dropped corruption charges against Edward Zuma’s “untouchable” business partner Thoshan Panday, and pushed for the unlawful racketeering prosecution of the then KZN Hawks boss who had investigated him, Johan Booysen.

She continues to insist that her decisions in these cases, which were overturned in court, were completely justified – despite several scathing findings being made against her.

Those findings were the basis she would have faced, had she remained in office.

While Noko has previously told News24 she had decided to step down prior to being given notice of the pending inquiry into her fitness to hold office, a statement released by the presidency on Friday confirms that she was notified three days before she resigned that Ramaphosa had decided that her conduct should be formally investigated.

A matter of courtesy

“In a communication dated 9 February 2021 and channeled through the Minister of Justice and Correctional Services, the President requested Adv Noko to provide written reasons why she should not be suspended pending the institution and finalisation of an inquiry into her fitness to hold office.”

As a matter of courtesy, on 11 February 2021, the National Prosecuting Authority, as the employer, informed Advocate Noko that she should expect to receive the letter from the President.

“On 14 February 2021, Advocate Noko requested permission to vacate her office.

“The National Director of Public Prosecutions (NDPP) forwarded Advocate Noko’s request to resign, via the Minister and with his support, to the President with the recommendation that Advocate Noko be allowed to vacate her position”.

The Presidency statement also says Batohi asked Ramaphosa to institute an inquiry into Noko’s fitness to hold office in November last year and further requested the President to suspend her pending the outcome of the inquiry.

The inquiry would have focused on Noko’s decision to drop corruption and fraud charges against Panday, a businessman accused of using bribery to secure R47 million in FIFA World Cup tenders from the SA Police Service.

She was also under fire over the role she played in the NPA’s legally invalidated decision to pursue racketeering charges against Booysen – who had been investigating Panday – over the alleged “hit squad” activities of the KZN Serious and Violent Crime Unit at Cato Manor.

The charges against Booysen and the unit were dropped by the NPA, following an in-depth investigation by a panel led by senior prosecutor Rodney de Kock, who made several damning findings about Noko’s apparent dishonesty in the case.

Noko was also chastised by Pietermaritzburg High Court Judge Trevor Gorven, who questioned her rationality in dropping all charges against Panday, in a ruling in which he dismissed the businessman’s attempt to invalidate the State’s decision to revive the case against him.

Pietermaritzburg High Court Judge Trevor Gorven said: “If one is looking for irrationality in the decision-making process in this matter, this is the place to find it,” Gorven said, in reference to Noko’s claim that there was no evidence to prosecute any person with any offence.

“This simply ignores a 400-page report by forensic accountants and a ‘trove’ of documents which allegedly provide evidence of the involvement of Mr Panday in the offences.”

Noko has sought to defend her conduct in both the Booysen and Panday cases and has openly questioned the legitimacy of the Investigating Directorate’s pending case against the businessman and his police co-accused.

While a prosecutor in her position would typically serve a six-month notice period, Noko is understood to have left her position on 1 March – a clear indication of just how badly her relationship with the NPA has broken down.