Artists have been protesting and staging sit-ins at various arts councils across the country, citing prolonged lack of funding. 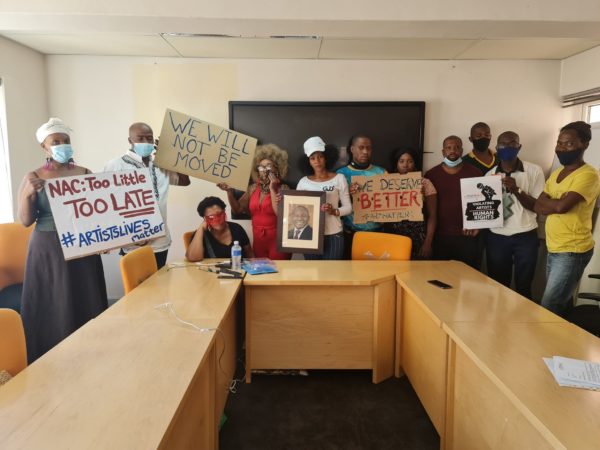 Artists continue to stage a sit-in at the National Arts Council offices, saying they are going nowhere until they get paid what is due to them. Photo: Twitter/@tsepomhlongo

As soon as Covid-19 lockdown ensued in March last year, the livelihoods of thousands of artists were instantly throttled.

Since then, they have been attempting to get relief from the Department of Sports, Arts and Culture.

Many have still not been awarded funding by the National Arts Council (NAC), an agency of the department.

As such, artists have been protesting and staging sit-ins at the NAC’s offices, as well as at the department’s provincial office in Gauteng, and at the Performing Arts Council Free State, a course of action endorsed by the Economic Freedom Fighters (EFF).

In a statement issued on Saturday, the party said it supported the stand taken by artist and industry activist Sibongile Mngoma, adding that her arranging the NAC sit-in has been supported by artists across the country.

EFF Statement On The National Popular Uprising By Artists pic.twitter.com/ueWhwTtvvz

“Artists have set out eight questions to the NAC regarding the Presidential Stimulus Package. Amongst them, they demand to get the list of artists who have received disbursements. This is a demand the EFF has been making since last year and we have never received a satisfactory list.”

The NAC published what they titled a full list of Presidential Employment Stimulus Package recipients on Friday.

The EFF said it was “reliably” informed that the NAC “is not able to make those payments due to corruption and maladministration.”

It went on to call Arts and Culture minister Nathi Mthethwa “useless” for coming out in support of the NAC, “primarily because he has absolutely no clue what is happening at the entity.”

“We support all these actions because artists have suffered the most in the Covid-19 meltdown because of the incompetence of a minister.

“The EFF has been vocal about the incompetence of Nathi Mthethwa and his entire department. There is not a single SOE under that department that is being run properly.

“The entire industry is in disarray because of Nathi’s lack of understanding of the industry… The minister is useless and must be removed.”

The party vowed to meet with protesters, and to lobby “aggressively” for Mthethwa’s removal.

An initiative led by Thandile Petshwa, Jaco van Rensburg and Yvette Hardie, in collaboration with the Im4theArts foundation and the South African United and Creative Industries Federation, intends to pursue legal action against the NAC.

@PresidencyZA please intervene!!! Creatives slept at the NAC offices regarding the PESP funding, which was supposed to be paid to artists months ago!!!!! If you are an artist, please share this till it reaches the President!!!! pic.twitter.com/RhCbP56byU

According to a form released by those heading the initiative, after applying for grants, some artist projects were confirmed and contracted by the NAC, with specific payment schedules and budgets.

The NAC mandated that all projects had to be concluded by the end of March.

However, they said that during a recent meeting between then-NAC CEO Rosemary Mangope, and council members Tshepo Mashiane and Dr Sipho Sithole, the NAC said they would be reducing all funding, impacting further on projects that were already contracted to take place.

The Democratic Alliance (DA) last month accused the new NAC board, whose term started in January, of breaking contacts signed with 613 artists illegally, bringing the sector to its knees.

They too slammed Mthethwa’s department, saying his “hands are dripping with the blood of an entire industry.”