The initiative aims to see more than one million young South Africans being offered paid work experience over the next three years. 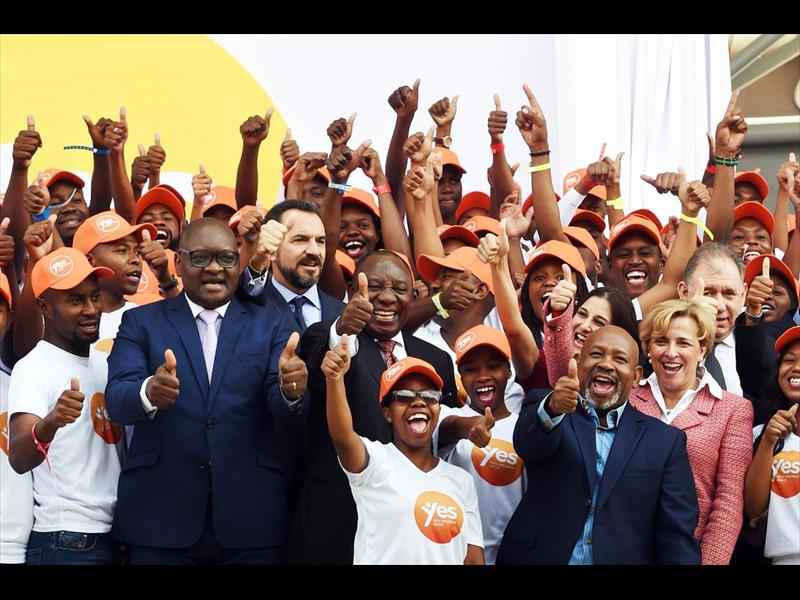 President Cyril Ramaphosa with the first 100 young people to be employed. Photo: Supplied

President Cyril Ramaphosa has launched a youth employment service to prepare the young people for the work environment.

The YES initiative forms part of a broader plan to impart technical skills to the youth, Pretoria East Rekord explains.

Speaking at the launch in Johannesburg on Tuesday, Ramaphosa said he saw the initiative as one pillar of a broad and comprehensive national effort to create opportunities for young people.

“Another central pillar of this effort must be the development of the skills and capabilities of young people.”

The initiative, which is a joint effort by government, labour and business, aims to see more than one million young South Africans being offered paid work experience over the next three years.

The programme follows research undertaken by stakeholders which showed that one year of work experience, coupled with a CV and reference letters, increases a young person’s chances of finding employment threefold.

At the launch, Ramaphosa was also introduced to the first 100 young people who will be employed at Absa, Investec, Netcare, Sasol and Unilever through the YES programme.

Akani Mbondzisa, a 26-year-old from Summerset in Mpumalanga, said he was particularly excited as he wanted a job to support his daughter.

“Last year, I was unemployed for a year and whenever I applied they (employers) said they wanted a year’s experience. Once I get the experience, I will be able to work and support my daughter.”

According to YES CEO Tashmia Ismail-Saville, out of a youth population of 15.5 million, 5.8 million of these aged 18-34 were unemployed.

Ismail-Saville said the initiative particularly aimed to create opportunities for those who lacked the necessary skills required by companies for formal employment.

“YES aims to give that portion of our youth a crucial first chance to gain a paid work experience of a decent quality,” said Ismail-Saville.

“Youth will not be excluded based on academic ability, or skills they may or may not possess.”

Ismail-Saville called on small businesses to play their part as they had a huge employment base.

“Large businesses alone cannot absorb sufficient numbers of youth. Over two-thirds of South Africa’s current employment base is medium-sized companies and smaller, making it critical that they [small businesses] are involved with the programme.”

As an additional incentive for small businesses, participating businesses employing black youth between the ages of 18 and 29 will be eligible for recognition in terms of the employment tax incentive equivalent to an R1 000 per month.

Businesses will also qualify for a new youth employment B-BBEE recognition, which is to be gazetted shortly.

Young adults who wish to be part of the programme will be required to sign a contract with YES indicating their commitment, and must comply with the following requirements:

– must be unemployed for more than 6 months.

– It is not obligatory, but should companies want to claim the employment tax incentive, then the YES youth must be between the ages of 18 and 29.

– The salary is expected to be set at the national minimum wage level of R3 500 per month and includes associated training and support which on average will bring the cost to R55 000 per annum.