Why Mohlakeng is at a standstill

Protesters explain why they have brought parts of Mohlakeng to a standstill. 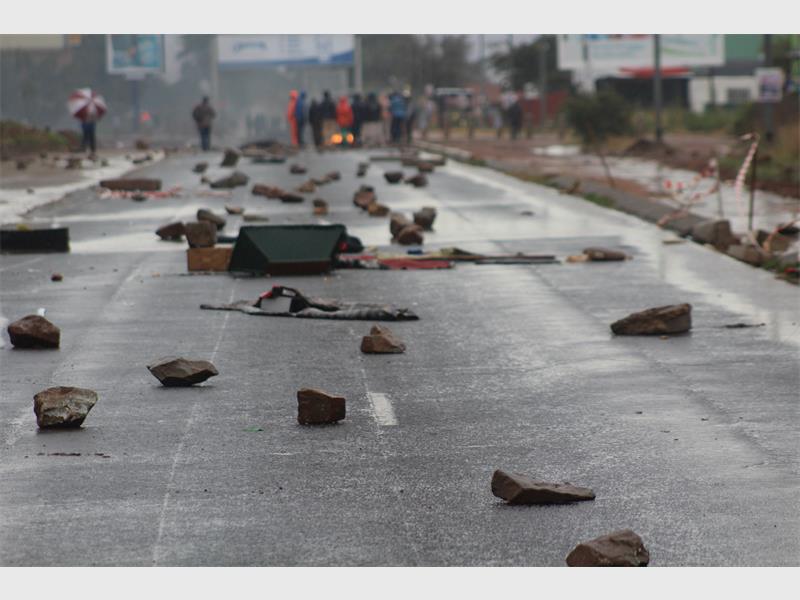 The main entrance to Mohlakeng, barricaded by protesters with all sorts of objects, 14 May 2018.

Parts of Mohlakeng were brought to a standstill early today as protests continued, Randfontein Herald reports.

Not even the cold and rainy weather could deter the angry and frustrated residents from expressing their dissatisfaction with the local municipality.

Starting at 4am, protesters began barricading the roads with burning tyres and large stones.

This morning Captain Appel Ernst, spokesperson for the Randfontein Police, stated that the R28 and R559 have been re-opened following the continued protest actions in the Mohlakeng area.

The issues that the residents are unhappy about range from a lack of amenities, lack of infrastructure, lack of development and poor service delivery, to residents being sidelined for employment opportunities and incurring high rates and taxes on their properties. Residents also complained that there is a lack of interaction between the municipality and the community.

One angry resident who asked not to be named said the community of Mohlakeng is always neglected when municipal projects and services are rolled out.

“The municipality is aiming to develop houses without saying anything about schools. The government is saying education is important, but in this case, the school matter has not been addressed by this municipality,” the resident said.

Residents said they are also unhappy about the fact that when job opportunities arise, locals get overlooked in favour of people who live in different areas, particularly people in Bekkersdal.

“According to the Labour Relations Act, when there are job prospects in any area, the first people to be considered to fill such posts have to be those living in the area. But we see that whenever there are projects in the municipality, people we do not even know are hired.

“We demand to know the criteria that are being used to hire such people. It is really questionable when the local people are not the priority when it comes to job opportunities because we are the ones who voted for our mayor.”

Another resident said: “Lack of amenities is really making our lives in this area hard. To us, it looks like we are not a priority to the municipality. We are starting to think that we are the least important, because you get better malls located in the suburban areas of Randfontein.

“People in this area are already poor as it is, so having to travel for amenities is also too expensive for most of us.”

The resident said services like mobile clinics and mobile police stations were promised to the community but to date, the community is still waiting.

“To get to almost every service in Mohlakeng, you need to take a taxi, as nothing is close by,” the resident added.

Regarding the havoc in the area, Ernst said the police are monitoring the situation closely to minimise the violence and calm the situation.

“At the moment, we are trying to police in the area, and therefore we cannot comment any further,” Appel said.