A man from Cape Town recently dared to swim to the island, baffling residents and conservationists. 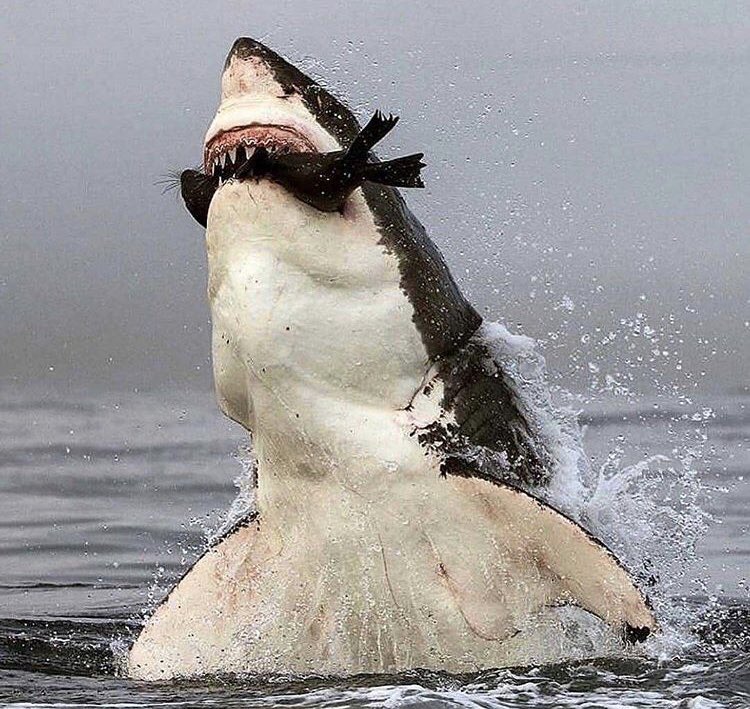 Outrage, alarm, and intense curiosity erupted when it emerged on social media last weekend that a man had swum through shark-infested water to Seal Island, off Mossel Bay.

This area is where great white sharks feed on the seals which breed on the island, reports Mossel Bay Advertiser.

Aerial photographs of the sea around the island reveal large dark patches: these are the silhouettes of the colossal sharks lurking in the bay. 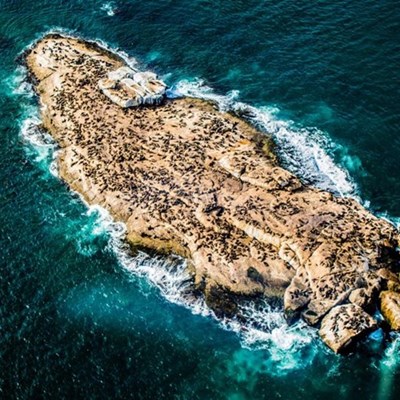 The swim prompted many questions – Was the swimmer a foreigner? Had he been irresponsible or simply ignorant? Was he acting out a dare? Or was it a suicide bid?

The man who braved the swim is Cape Town resident Fanie Nel.

He had just completed his swim around the island on November 9 and was on the side of it near the large white tanks in Voorbaai, when he was picked up by a boat, First Strike, belonging to White Shark Africa, whose skipper insisted he get out of the water.

White Shark Africa runs shark cage excursions in the bay. They throw mashed pilchards in the water to attract the sharks and then let down a cage with people in it so they can see the sharks up close.

Richard Theron, who was crewing on First Strike on the day, this week told the Mossel Bay Advertiser that a client on the boat was the first to see Nel in the water.

Theron said when they plucked Nel from the water, they asked if he wanted to go down in the cage and see the sharks he had been swimming with.

“But he said ‘no’, he’s got a meeting!” Theron exclaimed, wide-eyed. Nel is one of the directors of a financial advisory firm based in Cape Town, and was in Mossel Bay for a quarterly directors’ get-together.

He told the Mossel Bay Advertiser this week that with the knowledge he now had now about the sharks, he would never attempt the swim again.

Theron said: “[Nel] said someone had told him there were sharks, but the last encounter had been 15 years ago, which is true.”

There has been much speculation as to why there are not more encounters, considering the large number of great whites in the bay. The main reason is speculated to be that they are well-fed and not hungry for human flesh, given the abundance of seals.

Nel said he usually ran or cycled for exercise. He was not a regular open-water swimmer. He mainly competes in marathons and biathlons and says he is taking part in the 2019 ATU Duathlon African Championships in Cape Town and the Iron Man in Durban next year.

“[Nel] told us he had done open-water swims in Cape Town, but not in shark feeding areas,” Theron said. “It’s important for locals to be aware of the sharks in the bay, and advise visitors not to swim out to sea.” 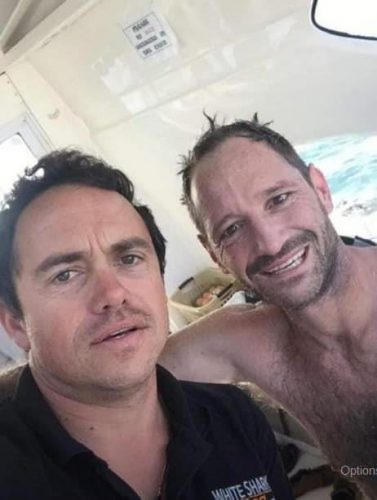 Not worth the risk
Nel said, in hindsight: “I think it’s important to get expert advice before you attempt something. For instance, many people will say you shouldn’t go spearfishing in certain areas. You will be eaten. Don’t go by hearsay, ask someone who really knows. That is what I say.

“I got an email from someone who advised me to contact marine biologist Enrico Gennari about where to swim in the Mossel Bay area. I will ask him.”

When contacted for comment, Gennari, who is the director of the firm Oceans Research, had a hard message for Nel and other risk-takers: “Swimming around the island would be risky and irresponsible. You’re not just putting your life at risk, but if there is an unpleasant encounter you would hamper the conservation of sharks.

“There is resistance to conserving sharks, although shark bites are infrequent. You could damage the tourism of the area at the same time. To me personally, it is like walking in front of a lion and then blaming the lion for eating you. Yes, the lion’s stomach is full, but it might go for you.”

Some good has come of Nel’s swim, however. Mossel Bay “ocean boy” Johan Swanepoel, who posts his numerous marine photographs and videos on his Facebook page, Swimmingsharkville, and attracts thousands of views, is now organising an open-water swim from the Point to Dias to raise awareness of marine safety issues.

The statistics for Fanie Nel’s swim around the island.

A dream come true
“Fanie [Nel] is keen to join the swim. I’m planning it for February. We will have all the safety measures in place: a boat with us and I want to get all the relevant organisations involved, such as the NSRI. We will swim close to the shore. It has been my dream for three years to organise this.”

Swanepoel noted in a post on Swimmingsharkville on December 8: “Fanie wanted to do a 1km offshore swim after cycling on 9 November, as part of his training. The ocean was just too attractive – and I know the feeling – so he decided to turn towards the island.

“He got stung by a jellyfish but shook it off. He saw lots of fish species.

“Around the island, the boat of White Shark Africa arrived and the crew was stunned [by] what they saw. Fanie did not want to get into the boat at first; he was enjoying his swim, but eventually got in and was dropped off near the beach.”

Nel confirmed he was keen to do the open-water swim off Mossel Bay.

NSRI Mossel Bay station commander André Fraser said: “We are prohibited from entering into an agreement with parties regarding events organised. We only react to a call if someone is in need of help.

“We can be on the water for the event, but we will not be held responsible if something goes wrong.”