The company claims its systems prevented 16 incidents within the first six months of operation. A South African startup is hoping to reduce the number of shack fires with a new technology kit intended to provide early warnings for fires.

Lumkani has installed its early warning fire-detection system in 40,000 South African shacks since September 2015, when the product was launched.

The company claims its systems prevented 16 incidents within the first six months of operation.

Lumkani director of humanitarian projects, Francois Petousis, told News24: “We continue to look for large-scale grant sources to run funded projects, but our belief has always been that no one should have to wait for us to find funding if they want to get protection against fire.”

According to Stats SA’s 2018 general household survey, 17.9% of South Africans in metropolitan areas live in informal dwellings and there are 2.1 million shacks in SA.

There were 25,000 shack fires between 2010 and 2013, the Institute for Race Relations found and the Western Cape was the worst affected.

Lumkani devices are designed to be robust so that they can last a long time.

“The fire detectors have two AA batteries and last for at least 10 years on that battery life. Our system has extremely low running costs because of our IoT (internet of things) mesh network, which allows one solar-powered SIM-based monitoring device to cover 1,000 homes,” said Petousis.

The South African Medical Journal stated that there were about 5,000 informal settlement fires reported between 2009 and 2012 in its Energy poverty, shack fires, and childhood burns publication.

“The most hazardous of common energy appliances in use in SA is the non-pressure paraffin stove, which is also the main cause of fires and burn injuries,” wrote authors DK Kimemia and A van Niekerk.

To prevent false alarms and malfunction, the Lumkani devices are regularly tested.

“We have very strong quality assurance systems and our system continuously status pings to ensure proper operation of each detector, so we can be proactive in avoiding any detector issues,” said Petousis.

“That being said, our system is based on simple robust design and we are yet to experience a clear malfunction in the event of fire. Of course, if you are a Lumkani fire cover client, even if your detector were to malfunction, your claim would be processed all the same.”

While the system can send a fire alert to anyone, including emergency services, the rollout of this functionality has been problematic.

“Feeding into local fire services has proved to have a lot of bureaucratic challenge[s] and hence, we are yet to feed our information to them,” said Petousis.

“The main focus we had in developing our fire-detection system is the high risk of shack fires. The system was designed specifically for the informal settlement environment, and we will continue to grow our work in these areas. The only plans to expand would be into semi-formal and RDP homes where the risk of fire is still high.” 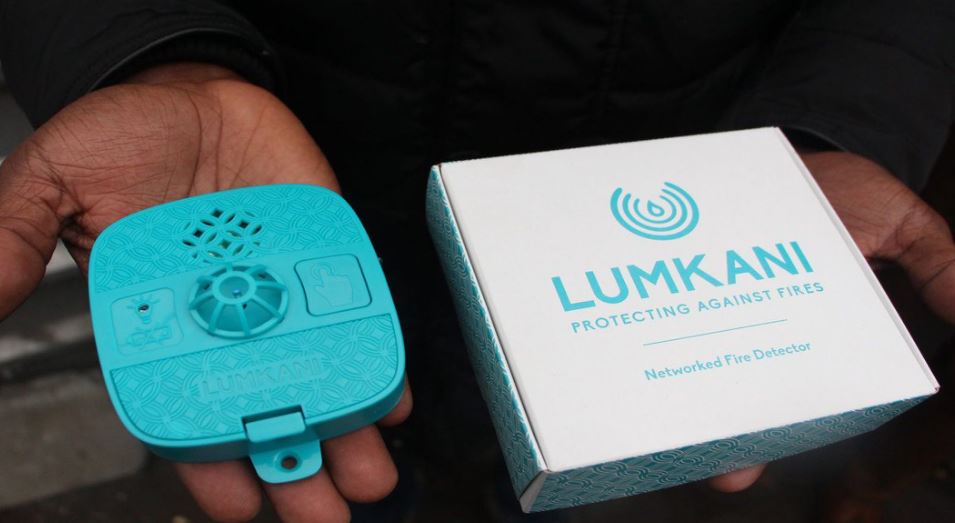