Fed up Roodepoort residents mend their own potholes

Despite escalating their complaints up the chain of command at the Johannesburg Roads Agency, the potholes multiplied. 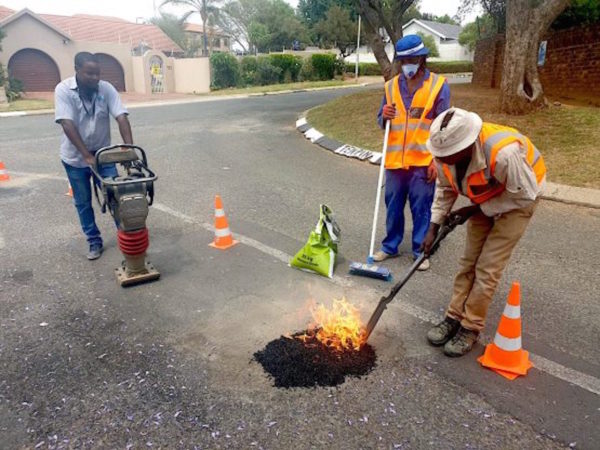 If you’re a Joburg resident, you might have noticed the untended potholes in the area where you live.

The Panorama Residents Association (PRA) in Roodepoort to the west of Joburg says it tried every avenue to get the potholes in its area fixed, to no avail.

Despite escalating their complaints up the chain of command at the Johannesburg Roads Agency (JRA), the potholes multiplied, until it became too much for residents to bear.

They complained of buckled wheel rims until they could take it no longer.

The association realised the JRA wasn’t going to get to the job any time soon, so it took matters into its own hands.

For the princely sum of R10 000, the PRA went out and bought one ton of pre-mixed tar and got some local residents to volunteer their time, while a local company EC Security provided a machine and labour to compact the tar. 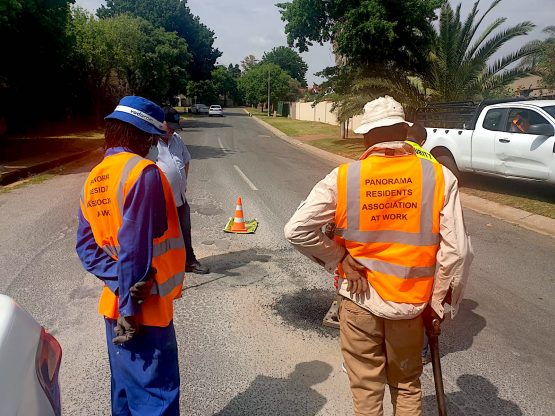 The association is funded by R250-a-year membership fee. Image: Supplied

One day later, nearly 100 potholes on the key arterial routes had been filled.

Oddly enough, a day after starting their volunteer project, the JRA must have read about it in the local Roodepoort Record, because suddenly it sent out a team to start mending potholes in the area.

Chair Dave Baxter says the association is funded by R250-a-year membership fee, which is used to clear overgrowth near sidewalks and green areas, mend fences in public spaces and, now, to fix potholes.

This does not include a 64-strong volunteer force involved in local community policing to keep crime under control.

Baxter has been monitoring crime stats in the area for years and says these combined efforts have resulted in a 20% drop in local crime rates.

“The Covid lockdown certainly helped because everyone was under curfew, but we have found that keeping the area clean and neat also helps keep crime away.”

Baxter and his fellow PRA members are strong advocates of the ‘broken window’ policy which is credited with reducing crime in New York City during the 1990s by addressing minor infractions such as loitering and public drunkenness.

In other words, fixing broken windows creates a sense of order which makes residents feel safer, whether or not crime rates are actually reduced.

One of the authors of the ‘broken windows’ policy, the late George L Kelling, discovered that putting police on foot patrols, rather than in vehicles, also creates a sense of safety and wellbeing.

SA has experimented with community policing forums, and some still exist around the country, but many areas are now policed by private security firms, in part because of an overstretched police force.

This study also suggests that the police have some work to do to build public trust.

Community policing has made a robust comeback, with the support of the PRA and its 12 neighbouring residents’ associations.

The Honeydew Community Policing Forum is headed by 67-year-old real estate businessman Jon Rosenberg, who has built a 64-strong volunteer force that patrols a large area to the north and west of the city.

It is this ‘eyes and ears’ on the ground that has reduced crime by an estimated 20% since the volunteers started patrolling the streets. It also provides victim support when needed.

Rosenberg says community policing forums fell into disfavour in parts of the country due to cowboy-type behaviour among some volunteers.

“This is why we put our volunteers through basic and ongoing training to make sure they know what they are allowed – and not allowed – to do,” he says.

“We are there to assist the police and report suspicious behaviour when we spot it. Our volunteers are kitted out with uniform shirts and jackets, and soon we will be providing bullet-proof jackets.

“Unfortunately, the criminals of today are often armed and think nothing of shooting a member of the public, so we have to take steps to protect ourselves.”

That’s one example of local residents taking back their streets.

As Moneyweb previously reported, Free State residents of the Lesotho border town of Ficksburg have started to run a parallel local government because of the perceived ineptitude of the local municipality.

Funded by residents and local businesses, they send out teams each week to clean up litter and clear overgrown brush from the side of the road.

This had the effect of driving criminals, who had taken sanctuary in the overgrown brush, out of the area.

The Institute of Race Relations (IRR), under its #StopCitizenAbuse campaign, has adopted the PRA programme and wants to see similar campaigns being replicated across the country.

Says Amy-Claire Morton, spokesperson for the #StopCitizenAbuse campaign: “The IRR encourages communities either struggling with getting their municipality to attend to infrastructure and service delivery, or taking the initiative to fix things themselves and thereby acting to stop citizen abuse, to reach out to us.”

She adds: “Doing so will enable us to use such examples to inspire other communities and arm us with the real-life examples of citizen abuse that will help to put pressure on the government.”