The speech President Cyril Ramaphosa eventually got to deliver in his Sona will now be the subject of debate for at least 10 hours - over Tuesday and Wednesday. 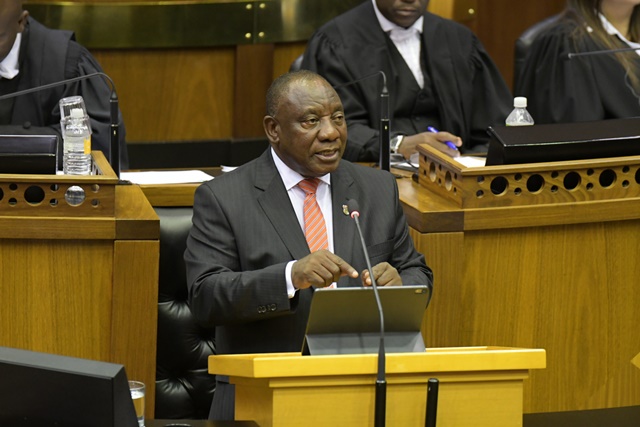 The events of last Thursday evening might well cast a pall over MPs’ work in fleshing out the State of the Nation Address (Sona).

Ramaphosa will respond to the debate on Thursday.

Tuesday’s sitting is scheduled from 14:00 until approximately 20:00, but it is likely to finish much later if there are any disruptions.

This could well be the case, as MPs participating in the debate are likely to raise the EFF’s behaviour during Thursday’s tumultuous affair, which could lead to EFF MPs raising points of order.

Albeit the list of MPs who will participate in the debate is not available yet, it is also highly likely that Public Enterprises Minister Pravin Gordhan will participate, as Ramaphosa spoke much about state-owned enterprises, and Eskom and SAA are two of the most burning current issues.

The EFF will most likely object to Gordhan’s participation. During the debate on last June’s Sona, they left the chamber when Gordhan spoke, and when he delivered his budget vote speech, EFF MPs stormed the podium.

At these debates, an ANC MP, probably chief whip Pemmy Majodina, will be first to speak, followed by the leader of the opposition, now DA interim leader John Steenhuisen, followed by EFF leader Julius Malema.

All parties will participate.

This continues on Wednesday, when the sitting will start at 14:00 with a scheduled conclusion of approximately 18:00.

Ramaphosa’s response is also scheduled to start at 14:00. This might also be subject to interruptions as Malema warned after they left the chamber on Thursday evening that this will be how they engage with Ramaphosa from now on.

All these sittings are joint sittings, meaning MPs from the National Assembly and the National Council of Provinces (NCOP) are in attendance.

It is quite possible that National Assembly Speaker Thandi Modise or NCOP Chairperson Amos Masondo could say a few words about what transpired on Thursday evening at the start of Tuesday’s proceedings.

They have already referred the EFF MPs to the Powers and Privileges Committees of both houses of Parliament to investigate “allegations of conduct constituting contempt of Parliament”, according to an official announcement from the presiding officers contained in Friday’s Announcements, Tablings and Committee Reports (ATC) document.

DA chief whip Natasha Mazzone said in a statement on Monday the DA welcomed the decision to refer their conduct to Parliament’s Powers and Privileges Committees.

“We believe that, if found guilty by this committee, Parliament should open a criminal case against the members involved and that they be charged with contempt of Parliament,” she said.

She explained that the Powers, Privileges and Immunities of Parliament and the Provincial Legislatures Act prohibited improperly interfering with or impeding the authority or functions of the House, and creating or taking part in any disturbance within the precinct while the House is sitting.

“In terms of Section 13 of the Act, this conduct would amount to contempt of Parliament, an offence that carries a sentence of a fine or imprisonment of up to three years,” Mazzone said.

“If the Powers and Privileges Committee, therefore, finds any EFF members in contravention of the Act, Parliament would be well within its rights to refer the matter to the National Director of Public Prosecutions, as provided for in Section 12(6).”