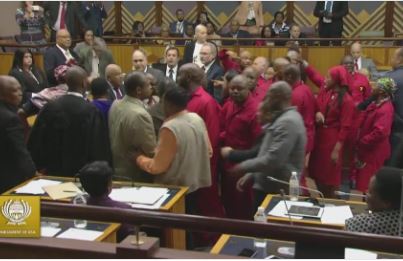 Disciplinary action against 20 EFF MPs, accused of attacking Public Enterprises Minister Pravin Gordhan during a budget vote speech, proceeded despite the accused members failing to show up before parliament’s Powers and Privileges Committee.

On Wednesday, proceedings went ahead despite the absence of the accused MPs.

EFF MP Mbuyiseni Ndlozi argued against the hearings and proposed the matter be heard by a retired judge or senior council.

That proposal was refused as committee members argued the proceedings thus far had gone according to the law.

Ndlozi raised several technical points as to why the committee could not proceed with the matter, saying: “You don’t know whether the members of the EFF are in the next room, but you have been speaking to their legal representatives about the setting of the date, but you have not spoken to them. The evidence before us is that you have been speaking to legal representatives about the time of today. Do not be unfair.”

The committee, however, agreed proceedings would not be chaired by a retired judge or senior counsel.

In e-mails sent to parliament’s acting secretary, Baby Tyawa, prior to the meeting, the EFF’s legal team, led by Kameel Premitid and Angelike Charalambous, raised the issue of a fair trial.

“It is abundantly clear that a decision has been taken to hold the hearings, despite the fact that, as you readily acknowledge, our clients written representations have yet to be filed.

“This is a gross irregularity. It is also, with respect, abundantly clear that either you and/or the committee have already taken decisions regarding our clients despite the jurisdictional requirements for such decisions to be taken not yet being fulfilled,” Charalambous said.

She added the conduct of the committee to date illustrated this matter had been or was being pre-determined and our clients would not enjoy a fair hearing.

“As an aside, we further record that according to the timetable set out in your letter, the written representations will be received by you and the committee on 23 November at 12:00. The hearings are scheduled to commence the next day on 24 November at 10:00. This is less than 24 hours later.

“We record that given parliament has charged 17 EFF MPs with disciplinary proceedings, and that each of our clients are entitled to file separate representations, and have them considered individually, on their own merits, the time within which the committee is expected to make a decision regarding the hearings is insufficient,” Charalambous said.

Towards the end of the first session, the EFF’s legal team said it intended to imminently challenge aspects of the act and rules of parliament.

The hearings will continue on Thursday.