The minister says the NPA's Investigating Directorate has prioritised nine corruption cases for enrollment within the next six months. 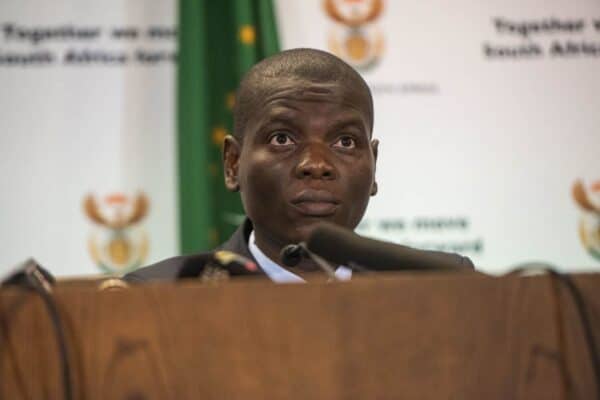 Justice Minister Ronald Lamola has defended the National Prosecuting Authority (NPA) amid mounting pressure from the public for the organisation to move with speed to prosecute state capture cases emanating from the Zondo Commission.

Lamola on Tuesday called on the public not to second guess the commitment of NPA boss advocate Shamila Batohi and her team’s efforts to pursue high-profile prosecutions related to state capture.

“We shouldn’t second guess them. Their better placed then all of us to tell no lies and claim no easy victories. We do believe that they will be able to discharge their responsibilities as enshrined in the NPA Act,” he said.

Lamola made the remarks while appearing before parliament’s Portfolio Committee on Justice and Correctional Services.

The minister presented to MPs his department’s annual performance plans for the 2022/2023 financial year.

Lamola said the NPA had made progress in the past year with its cases, despite the criticism levelled at the organisation.

He said the NPA’s Investigating Directorate (ID) had prioritised nine high-profile corruption cases for enrollment in the courts within the next six months.

The ID was established in 2019 to prosecute corruption-related crimes in general, including allegations of state capture from the Zondo Commission, chaired by Chief Justice Raymond Zondo.

“The ID has declared 82 investigations and enrolled 20 cases with 65 accused. It has also prioritised nine corruption matters for enrollment within the next six months,” Lamola said.

Lamola commended the former head of the ID advocate Hermione Cronje for laying the groundwork for the NPA to prosecute state capture cases.

Cronje resigned from the ID last year without having successfully prosecuted a single case since the unit’s establishment. She was replaced by advocate Andrea Johnson.

Breytenbach said it was “gobsmackingly depressing” that the ID had spent the last few years laying the foundation for its prosecutions, instead of going after those implicated in corruption.

She said it was concerning that three years since the ID was established, not a single person implicated in state capture was hauled before the courts.

“What on earth have they been doing if they’re only laying the groundwork?

“They were brought into being to deal with high-profile prosecutions, mostly emanating from state capture. Those cases are not new, we’ve known about them for years. “

READ MORE: NPA out of depth, and needs help to fight crime

In response to Breytenbach’s criticism, Lamola defended the ID saying it was not sleeping on the job as it had enrolled some cases in courts.

He said the government was also in agreement with opposition parties that the tenure of the unit should be made permanent.

“There are cases that this committee is aware of; the [Free State’s] asbestos and Estina [dairy farm] cases… the issue is to ensure that the number of cases that are emanating, also from the Zondo Commission, are being attended to,” Lamola said.

Earlier, Lamola said his department was allocating much-needed human and capital resources to the NPA to enable it to do its job.

He said the resources would help to capacitate the prosecution body to go after those implicated in state capture and corruption without fear or favour.

“This new injection of resources must enable the NPA to combat organised crime, white-collar crimes and corruption.

“We know that it is not enough, but at least it is in the right direction to enable them to rebuild and to plan ahead.”

The minister also said the specialised commercial crime courts in Palm Ridge and Pretoria were expanded to be able to cope with some of the matters coming from the Zondo Commission.

“We also have a team working on the implementation plan of the various findings of the Zondo Commission recommendations, which falls within the scope of their work.

“This plan will be presented at an appropriate time to enable us to respond appropriately to the corruption challenges and recommendations that Zondo has laid bare to the nation.”

NOW READ: By hook or crook, Zondo will nail the miscreants