He has also says the Democratic Alliance is suffering an identity crisis and has reached its ceiling. 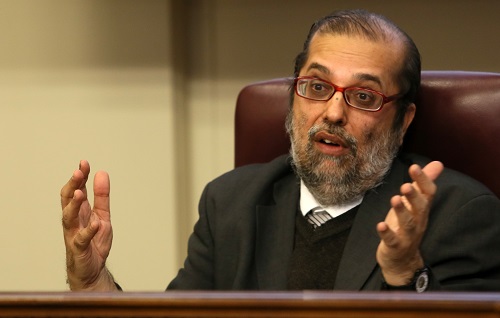 ANC MP Yunus Carrim’s speech at the Sona debate in parliament left the Democratic Alliance and Economic Freedom Fighters with egg in the face after calling them opposite sides of the same coin. In a speech that was praised by ANC MPs and left the House in stitches, Carrim said that though opposition parties called President Cyril Ramaphosa a dreamer, they were the ones with off-the-rail dreams.

The DA’s dream and “fantasy” was, according to him, in saying that they would govern Gauteng and the Northern Cape – either as a majority or in alliance with other parties – with the “worst” dream of thinking they would run the country. The DA had reached its ceiling, said Carrim.

“Where are you now? You’ve fallen flat, I can’t even see you. I hear the noise, but it’s so much that, noise – no substance. Let me also put it to you, in the real material world we live, you lost 1.5% of your vote. You lost votes among the African constituency, so you know what?

“You have no chance of coming to power. If you put together the ANC’s 57.5% and the EFF’s 10.2%, that means we have over 68% of the parties that have a substantial base among the African population. So what has changed since 1968? Nothing much, regrettably, Mr President. We have a highly racialised voting pattern and that’s nothing to gloat about. This is not something the ANC wanted, but what it does suggest, Mr Maimane, that your party has probably reached its ceiling.”

He did, however, told DA leader Mmusi Maimane to keep dreaming, because that’s what the ruling party liberated him to do.

“Thank us for that,” he added.

Cassim further said the DA had an identity crisis, was divided, split, and had no future.

But it wasn’t just the DA that was dreaming, said Cassim, the red berets were dreaming in saying they would win the 2019 elections.

“We will do this and that. Well, what happened? The reality is, they could master only a 2.5% increase over the 8.2 result in the 2016 local government election.”

Another dream of the EFF was an “all-powerful, father Christmas state” that would deliver everything to everyone overnight, said Cassim.

“And let me tell you something, it’s not simple Mao suits of the 1960s that they want for all, it’s Louis Vuitton red overalls.”

He further criticised the EFF’s “militaristic posture” and questioned why leader Julius Malema was referred to as the commander in chief (CiC).

“There is no armed struggle, we are a democracy, they are in parliament, why do they have a head a commander in chief? Where is the internal democracy? Who is he commanding? Towards what end? No clarity. He was too young to be in the armed struggle but he thinks if you attend an EFF rally that makes you a soldier.”

They are all about tactic and no strategy and streamed from one extreme to another, he said.